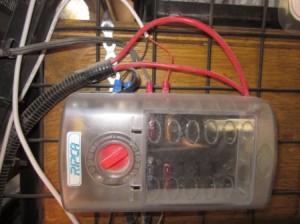 Thought I’d give a quick update on some vehicle techie issues.

One of the suggestions we received when we had our initial discussions about vehicle preparation was to install a fuse box in the vehicle. This fuse box would run off the second battery and be the source of power for all subsequent power needing installations. Sounded good to me at the time, and has proven to be very useful. When we installed the fridge it was wired directly into a 12V socket wired directly into the fuse box. The socket is nicely hidden behind the fridge, so out of the way from the rest of the cab.

When we travelled through northern Africa we often commented on how nice it would be to have light in the back of the vehicle. In Spain we bought a battery operated little desk lamp to use as cooking light, but it is now packed away. Instead, I bought a 12V 12 bulb LED strip that I have placed on the inside of the window on my tailgate (LC tailgate is split horizontally). It has its own 12V socket, wired directly into the fuse box. Neat and tidy. I have also wired in another 12V socket for the back, that can be used to charge batteries or to use for an external light, and an additional 12V 12 bulb LED for the inside of the cab. Gives really good light with minimum use of power.

I have also now mounted the inverter behind the passenger seat, easily reachable from the front. It is usually powered from the main battery via a 12V socket. This particular socket gets its power from the Toyota original ancillary power output that is mounted under the hood. The socket was one I installed (Neil installed, I helped) for our two-week trip to the Alps in 2011 for running the fridge.

The last electrical upgrade I have done is to mount a UK 220V 4-plug strip with a South Africa 3-pin plug on our load guard. This strip is permanently plugged in to a 20m extension cord, which now has a South Africa 3-pin plug on the end (as we are in Namibia). Once we get into Zambia I can swap the SA 3-pin for a UK 3-pin. The female end of the 20m extension cord is double-sided. On the other side to the strip I have plugged the fridge 220V cord in. When we arrive at a campsite with power, all I have to do is unwind the 20m, plug it in, and I have 220V for my fridge and for any battery charging that doesn’t have a 12V charger. The fridge is smart, so if there is 22V available it will use that, if not it will use the 12V supply from the second battery. 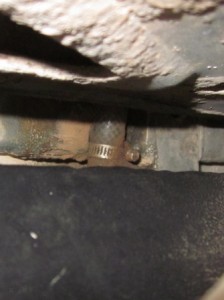 Some of you have seen that I had a fuel leak, and that I managed to have it fixed at the Soussusvlei Lodge. A bit more detail: I had an 80-liter fuel tank installed between the chassis and the spare wheel. It is directly connected to the original tank via a flow-through system. On top of the extra tank there is a small tap that the air/fuel feed-back hose can be attached to using a jubilee clamp. This tap is right up under the chassis, and there is very little – if any – spare space. After a total of 25,000km, the last 2,000 or so on very corrugated dirt roads in Namibia, the jubilee clamp had decided to snap, and so fuel was coming out via this feedback loop. As it is right on top of the tank it only happened after I had filled about 85L, and I lost a max of 0.3L. Not a big deal, but now I had a fuel leak (that I didn’t know the source of at the time). Our friends Noel and Ping had had some trouble with their vehicle, and had been to the Soussusvlei Lodge to sort it out. 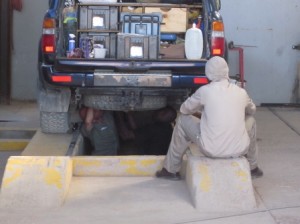 We went straight there, and were allowed to use the ramp when the guys came back from lunch. We loosened the four bolts holding the extra tank on one side to create some more space to wiggle the hose back on with a new jubilee clamp attached. It was a bit fiddly as there is not much space under there, but we managed to fix it in about half an hour. Not sure if all lodges have ramps, but given the standard of roads and distances to the nearest garage I am sure a ramp of sorts is available at quite a few lodges and farms.

Lastly, I had an oil change done, including a new oil filter, at Toyota in Windhoek. The service there was really good and was done while we waited. I even received a follow-up call asking if all was OK with the vehicle.

Apart from the work we did in Zagora in Morocco, and the clutch change in Johannesburg, these are the only electrical and mechanical changes we have made. We are very happy with the way the vehicle is running and the way we initially designed the vehicle.

1 Response to A techie update