Along the Skeleton Coast

We finally reached the sea!  The vast Atlantic Ocean.  We had descended  about 900m over more than 100 km from the plateau to Henties Bay, a charming seaside town.  It seemed to be mainly retired people living there, and holiday homes for those living further afield, but had a very welcoming feel to it.

As we came into town, we stopped at the tourist information: a building also housing a coffee shop and arts & crafts.  As we climbed out of the car, the heat of the last few days had been replaced by an icy wind blowing off the cold ocean.  What a surprise!  We gathered information from the helpful lady before setting off again.  Destination: Cape Cross. 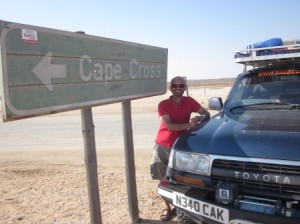 First though, we stopped to replenish our fruit.  While I was choosing and weighing and paying, a delightful elderly couple came to chat to Viking Explorer about our adventure.  Now in their early eighties, they sounded like they had been pioneers in their own time: newly married with a 6-month old, they moved to the Angola / Namibia border where they lived for 2 years while he was doing doctoral research.  And they thought we were adventurous!

On to the main road from Cape Cross to Swakopmund.  Like other roads in this area, this sand road has achieved tar-like firmness from compacting as cars pass over.  It was a pleasure to drive!  We made our way north to the seal colony at Cape Cross, and each of us was reminded of our time spent in Western Sahara and Mauritania: sand everywhere, biting wind, miles of flatness.  This was slightly better, as there was at least a little variation in the scenery with small undulations – but no escaping that wind. 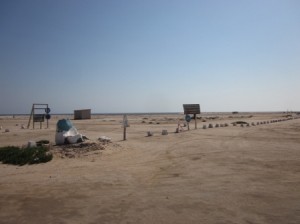 Our search for a sheltered campsite was looking unlikely.  Those we saw along the way were nothing more than a long drop next to a stretch of sand.  And as in Western Sahara and Mauritania, we weren’t looking forward to the prospects for the evening.

Anyway, off to see the seal colony, one of 25 in Namibia and one of the largest Cape fur seal colonies in this part of the world.  There were thousands!  Pups had been born in the last months, and there were many still suckling.  Lots were fishing in the water, while others jostled for superiority or merely the highest perch.

Cape Cross (or Cabo da Cruz) also has historical significance, being the place where the Portuguese explorers landed for the first time in 1485, and as was the tradition at that time, planted a cross.

We stopped past Cape Cross Lodge to escape the wind and enjoy a cup of coffee.  While sipping, we decided to return the 55km to Henties Bay where we could camp in less windy conditions, and also avoid cooking by heading into town for a fish meal.  Perfect.

The Henties Bay campsite was simple but luxurious – each stand had our own private bathroom with hot shower!  To escape the wind indoors and enjoy a hot shower was welcome at the end of a long day.  Also, with lots of little ablution blocks, the wind was dampened, and we could tuck away.  Then, off to the

We woke the next morning on the true Skeleton Coast – during the night the winds had died down, and the sea mist had rolled in.  Everything was coated in a gentle sheen of moisture and visibility was down to about 30m.  Such an eerie feeling.

We set off southwards towards Swakopmund on the hard packed gravel roads.  To our right, the Atlantic Ocean; to our left, the vast sands.  But in the mist, not much to see.  This coast is dotted with shipwrecks, so we took a fisherman’s track down to the water’s edge to try and find one marked on the GPS.  No such luck.  Maybe the mist was too thick, maybe they are further out.

We detoured through the little village of Wlotzkasbaken – a quaint place where the large plots of land are marked out with stones and the houses are colourful: red with purple doors, yellow with orange doors, blue with white window frames.  Such a cheerful sight. 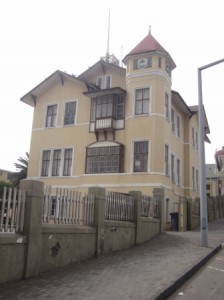 Gradually we drew in on Swakopmund, our destination for provisions (Shoprite) and park permits for Namib Naukluft (Ministry of Environment and Tourism).  Everything was so tidy – no litter, few beggars, just the quiet bustle of people getting on with life.  The old German colonial buildings have been beautifully restored, and mainly seem to house government departments and hotels.  It made me recall the neglected, run down French colonial buildings in St Louis, Senegal.

1 Response to Along the Skeleton Coast