Posted on December 22, 2012 by African GirlChild 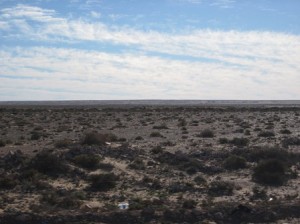 Such a contrast to reach the flats of Western Sahara.

We left Icht and headed towards Tan-Tan on the tar.  Although we had originally planned to drive the pistes from Assa to Smara, local opinion was divided on whether the military would turn us back or not.

In the end, we headed to the coast and started the long journey to the border.

Kilometre after kilometre without anything in particular to rest the eyes on. It seems such a desolate place with no real purpose – other than as a transit route between Morocco and the rest of southern Africa. There are lots of fishermen along the cliffs, and there seems to be some heavy industry in some of the major towns we passed along the way. Apart from that, there is just what feels like an endless stretch of road, only broken up occasionally by a river estuary or a lagoon, or more frequently by a string of what (to me) are pointless police checks where you have to hand over your life story. The most bizarre was the police dressed in grey standing 100m ahead of the police dressed in blue. Both asking for the same information… I have no clue what it is being used for. 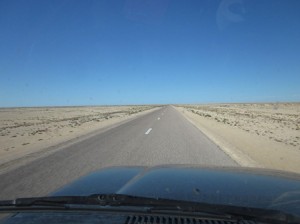 We stayed a night in a Bedouin camp north of Laayoune, and experienced a very special sort of quiet.  The following night we spent in a fully lit campsite in Boujdour – with many Senegalese driving heavily laden estate cars heading southwards. 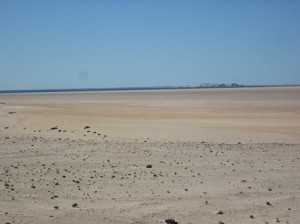 After Boujdour, the scenery seemed to shake off its dourness – suddenly, tiny blue, red, pink and yellow flowers appeared along the roadside.  The barren flatness gave way to small scale canyons.  And eventually, on approaching the turnoff to Dakhla, the sand dunes and flats emerged.

And so we have a few days to relax from the relentless driving, celebrate Christmas with new friends and prepare for the next border crossing.

5 Responses to …and flats