For years we have wanted to visit the Apartheid Museum, and we made it a priority this time.  It is an enormous museum, and while they suggest setting aside 2 hours for a visit, that certainly wasn’t nearly enough. 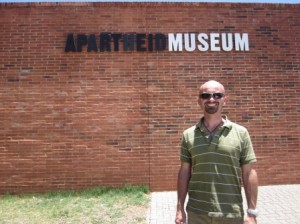 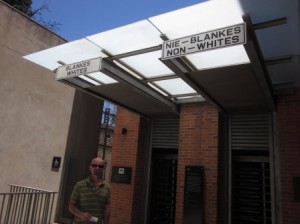 The temporary exhibition was about the life of Nelson Mandela, but unfortunately was laid out very badly, and we never worked out the order to the display – one minute we were reading about his childhood growing up in the Transkei, the next it was about his political involvement as a young man, and then suddenly he was being freed from jail!  Rather confusing, but I am sure it would have been more engaging had it been sequentially laid out.

The rest of the museum housed the permanent exhibition, and this was very well laid out, very comprehensive, and gave me such an insight into what happened, and what the issues were.  The museum starts the story back in the 1800s, even before the first settlers arrived from Europe, when the southern African tribes were moving around and warring with each other.  After the arrival of settlers, together with their slaves, the story unfolds.

It was mainly posters, but the exhibition was dotted with TVs showing mini documentaries, a full size casspir was on display (anti-riot vehicle) and a mock up of a tiny cell used for solitary confinement.  It was a mere 2.5 metres long, and I could touch both walls across the width.  No window.  In 2 places, there were also small theatres which showed 20 minute movies.  I found it incredibly moving, and at times I certainly shed a tear or two as I listened, read, watched. 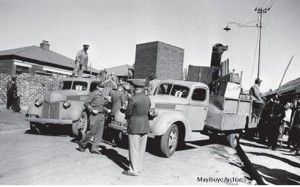 Photo thanks to Apartheid Museum

I was a child of the 70s and 80s, growing up in apartheid South Africa, and was finishing high school the year that Mandela was released.  I remember very little of the political goings on at that time, aside from the trade union demonstrations and marches that took place in downtown Johannesburg.  I remember some of the TV news broadcasts of the activities within the townships, including the bright yellow casspirs, but didn’t really understand what the political wranglings were. 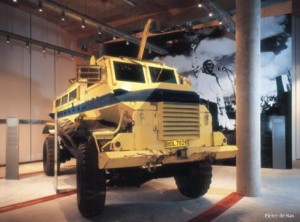 Photo thanks to Apartheid Museum

The one aspect that was really missing for me at the museum, though, was the fact that not all white South Africans bought into apartheid.  The museum unfortunately makes it appear that as a white South African, you were all in favour of the state of apartheid, when this isn’t the case.  The portrayal is that resistance to apartheid was from the blacks, and while on the whole this is true (due to sheer numbers) it overlooks the fact that most whites were not supportive.  This was echoed so loudly in the referendum in 1992 when we whites could vote on whether the government should proceed with its plan to dismantle apartheid.  The 68% majority YES vote is a powerful indication. 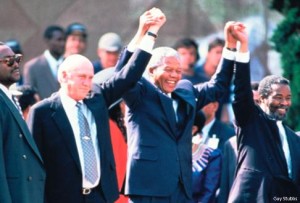 The other aspect for me, is what a miracle it was that South Africa did not descend into civil war in the run up to Mandela’s release, as well as in the ensuing years.  I was intrigued to discover that there were a lot of discussions taking place between the government and Mandela in the years prior to his release, in an effort to bring about change.  The museum even had footage of Mandela meeting the then president PW Botha – complete with suit and tie and not a handcuff in sight!  And when change did come, it came swiftly:  FW de Clerk took over from PW Botha as President in September 1989.  In his first speech after assuming the party leadership, at the opening of Parliament on 2nd February 1990, he called for a non-racist South Africa and for negotiations about the country’s future.  He lifted the ban on the African National Congress (ANC) and a few days later, released Nelson Mandela. He brought apartheid to an end and opened the way for the drafting of a new constitution for the country based on the principle of one person, one vote.

It is an incredible story, and we should never forget.

(Apologies for lack of photos – no cameras allowed inside the museum)