Posted on October 16, 2013 by African GirlChild

After Kgalagadi Transfrontier Park we headed towards the next park to the west; Augrabies Falls National Park. We made another stop in Upington to stock up on food and fuel, had a quick cup of coffee, and set off. From Upington the road to the park follows the Orange River, and we soon found ourselves in a completely different landscape to the Kgalagadi; there were vineyards as far as the eye could see. 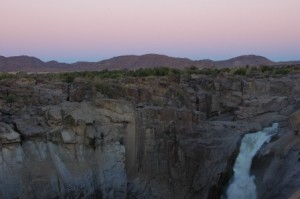 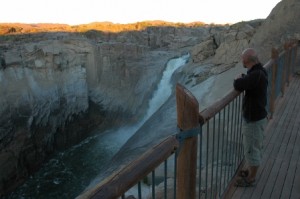 Augrabies Falls NP lies to the south of Kgalagadi, just north of the N14 and has a tiny border stretch with Namibia. It is a relatively small park at just over 55,000ha, established as a park in 1966. Accommodation includes chalets and family cottages, plus a large campsite. There is also a well-stocked shop at reception, and a privately owned and operated restaurant. 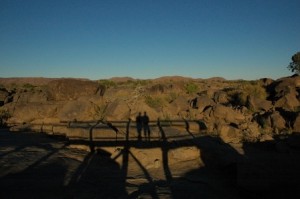 On arrival to the campsite we found a welcome spot in the shade, packed our groceries away, and enjoyed the birdlife around us. There is a research project involving pale-winged starlings at Augrabies, so we kept an eye out for those. Then, as the sun started to set, we headed down to the Falls. They are magnificent, especially in the glow of the setting sun. The access to the Falls consists of a walkway, and there are six viewing platforms within easy reach from the campsite. We were joined by a baboon who was sitting on a rock enjoying life and a beautiful sunset sky. 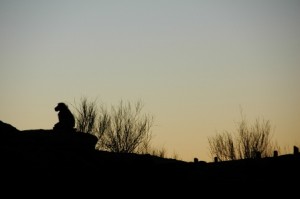 The campsite saw a steady trickle of people coming through; most stayed two nights, some only one, and our neighbours had set up camp for a week. They had also brought mountain bikes and running shoes, fully utilizing the offers of the park. With only leopard from the Big5 there are no restrictions to getting out and about on foot, as long as you stay on the trails. The biggest surprise for us was when one of the overland trucks came in to the campsite. Fortunately they were only three clients! and did not make any noise. 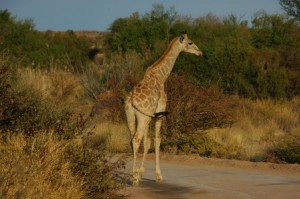 There is not a huge road network in the park. In essence it looks like a tennis racket with three different loops available; 68km, 80km and 100km. After the turnoff to one of the look-out points (at about 11km) only 4×4 is allowed. Unfortunately, the road out to where the loops start at 22km is very corrugated, which really takes away from the experience. We managed to reach the place where the loops start before our patience ran dry – and we decided to turn back. During the last 15km up to this point we had only seen a herd of kudu – other than that, the park looked like a deserted moon landscape (although we saw two groups of giraffe much closer to camp). 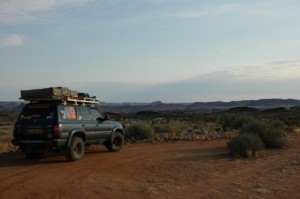 The park is beautiful, the landscape is stunning, the open areas are vast, and the mountains to the north are fascinating to look at while heading deeper into the park. We did not manage to do the park justice (probably because we had been so spoilt in the Kgalagadi) so it is still on our list of parks to visit in the future. When we come back we will bring our mountain bikes!