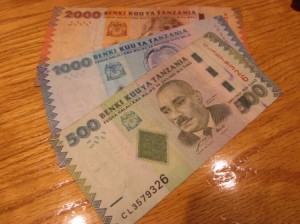 We crossed into Tanzania from Zambia on a little remote border post near Lake Tanganyika, and realised immediately that we were far from the tourist crowd in this part of the country.  Only 1 visa was needed ($50), and a small fee of $25 for various vehicle related fees.

The western part of Tanzania is not popular on the tourist route, and there was a distinct lack of tourist facilities as we travelled along.  The Tanzanian shilling is the currency of choice, and we took advantage of the few banks we saw to withdraw money from ATMs.  We didn’t try to change currency, so not sure if it would have been possible.  The prevailing exchange rate while we travelled was TZS1,600 = $1 (TZS2,400 = £1).

Being off the tourist route, there were no supermarkets to be found, and so we were reliant on the markets for our provisions.  Not really a problem for us, as we enjoy the markets, but we had also stocked up in Zambia before we left.  This kept our food costs relatively low at £5 per day.

Accommodation in this part of the country varied enormously.  Most of the time we ended up staying guest houses, as campsites were non-existent.  The price varied from $10 to $20 per room which mostly included an en-suite bathroom.  Remember to ask the locals which guest houses are used by the mizungus to make sure you find a decent one.  That said, all the ones we stayed in where spotlessly clean, and in good condition.  We certainly couldn’t complain.  Camping – when we did manage to find it – was $10 – $15 per person per night, depending on the facilities.  Rather on the pricy side.

We only visited one national park while in Tanzania – Katavi National Park – which kept our costs down.  Parks are expensive in this part of the world, and we paid $100 for the 2 of us plus the car for 24 hours in the park.