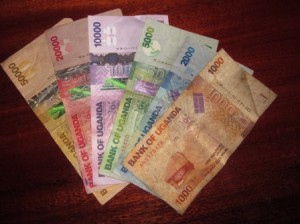 From reports of other travellers, Uganda was said to be a more inexpensive country to travel in.  Our start in the country was slightly pricy as we had to pay for 2 visas at $50 each (the only country in this part of the world that African GirlChild needed to pay for a visa for) and also vehicle related fees of $20.  Our COMESA insurance was still valid, so no more insurance costs.

The Ugandan shilling is the official currency, and we easily changed US dollars into local currency.  Exchange rate while we travelled was UGX2,650 = $1 (UGX4,000 = £1).

We had hit civilisation again!  After Tanzania, we were back on tarred roads, and more ”developed” towns.   This also meant there were supermarkets again – both Shoprite and Nakumatt in Kampala.  We stocked up while there, and then took advantage of local markets when we were travelling around.  Our daily food cost was £6.

Uganda is geared towards package tours – with lots of lodges – but the camping offering is growing, and certainly more now than in the past (Lonely Planet as a guide).  On the whole, it was rather inexpensive – mainly paying $5 per person per night.  The price and offering did tend to vary, but we always found somewhere where we found it in line.  Community campsites tended to vary the most, but our most favourite had simple clean offering at $3 per person per night.

With general prices being low, we decided to visit more national parks.  Although the pricing structure is prohibitive for taking foreign registered vehicles in, we managed to visit a few parks without a vehicle.  Entry fees ranged were about $35 per person, typically included in the activity fees, (but not for boat trips).  We thoroughly enjoyed our time spent in the parks – very magical and quite different from the southern African parks.  The only really expensive activity are the chimpanzee trekking and gorilla tracking.  Make sure to check directly on Uganda Wildlife Authority website (UWA) for latest prices if you are interested, as you can book directly with them, rather than through an agent with fees.

Even with national park visits, and souvenirs bought, we still enjoyed a relatively low daily spend of £38.  Magic country!