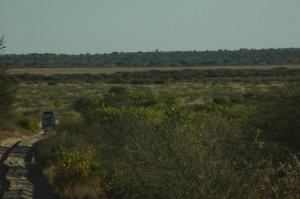 Magic. I’m running out of superlatives, and it is difficult not to repeat myself when writing these posts.

Central Kalahari Game Reserve lies in the middle of Botswana. It is the size of Switzerland or Denmark, and probably does not contain more than about 300 people at any given time. It has 36 campsites, and a few lodges, and nothing else. Just large areas of forest, shrub land, and sandy grass plains. There is a network of roads running through the park, with a 4×4 being essential. No running water in the park, and no stores to buy provisions. The campsites have now been slightly upgraded from what they were: they have a shower enclosure (use your own water), and a long-drop. Still, they are clean, spaced far apart (the one we stayed at was 15km from the next one), and all have good views. 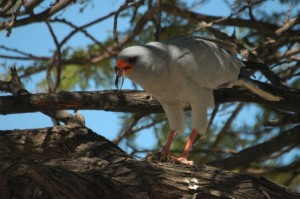 The access road is a sandy track that heads straight west for 40km, until you reach the gate. Sign-in done, it is then another 40km on the same sandy track until the first open pan. Although setting off early from Khama Rhino Sanctuary it was still a long day of driving. But it is worth it!

Our first campsite was at Sunday Pan. As we arrived quite late, we elected to go straight to the water hole first. It was very quiet that day, so we ventured back onto the plains to watch the herd of wildebeest graze leisurely in the afternoon glow. Back at the campsite we enjoyed a hot meal before falling asleep to the sounds of the bush. 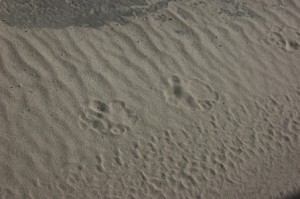 Our next campsite was booked at Passarge Pan. We set off early to take advantage of the cool morning air, staring intently into the bush for animals waking up from their night sleep. A brief stop at the water hole on the way out gave us three female kudu coming in to drink, and the drive itself gave us gemsbok and springbok. For us birders, a very special sight on the drive was the melanistic form of the Gabar Goshawk. This form only accounts for 6-25% of the population.

We enjoyed lunch at the campsite in the company of a Pale Chanting Goshawk. It had captured a field mouse for lunch, and had decided that the tree at the campsite was a good place to eat. We were treated to the very rare sight of a raptor eating its prey. The mouse disappeared head, feet, fur and tail – not letting anything go to waste.  After we had headed out on our afternoon drive –where we spotted a quartet of bat-eared foxes – our friends were treated to the sight of a black-backed jackal snatching one of the resident ground squirrels at our campsite. We really saw nature at play that day. In the evening, there was a lone predator of sorts wandering around the perimeter of our camp. Not quite sure of the sound, but either a lone jackal or a lone hyena. 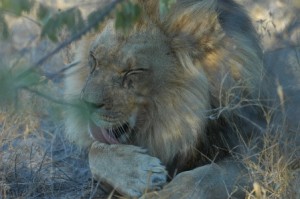 Having ventured quite far into the park, our departure the next morning was at 0630 – so that we could do the 80 or so kilometres back to the gate before 11, official park exit deadline. On the way out we spotted a honey badger before the real treat: lion coming walking down the road towards us! We were able to stop the vehicle right next to the bush where it had decided to chill for a few minutes, before it decided to move on. What a stunning sight. What a sensation to be that close to a big male lion! And we have some really good photos for our scrap-book as well. Very exciting. And a brilliant end to a lovely encounter with the Central Kalahari Game Reserve.