We have spent 3 days charging through Europe to avoid the “inclement” weather.

The day after we left the Alps to head to Lyon, the first snowfalls arrived in the Alps.

The day we left Lyon to head to Avignon, they were expecting snow in Lyon.

It has been tiring driving.

We gave up camping when we reached Avignon and sprung for a youth hostel.  Bit pricy, but we were both desperate to be inside, out of the cold and wet.  And boy, did the wind ever howl that night.  Viking Explorer put ear plugs in and slept through it all, while African GirlChild woke repeatedly through the night, and offered up small prayers that nothing large would be blown onto the vehicle.

In the meantime, Viking Explorer found an excellent weather website: www.weather-forecast.com.  It has weather maps for the world, and we have started using the Europe map.  It gives 10 day animated forecasts for wind speed, temperature, weather, and cloud.

He discovered that Perpignan was most likely to have consistent sunshine, and so we plotted our course in that direction.  Unfortunately, there was precious little he could do about the wind, which promised a few more days of gales before subsiding.

On our way to Perpignan, we spotted a giant MAN truck – obviously overlander looking.  We just had to stop!  After prowling around the apparently deserted vehicle, the owners stuck their head out of the window!  Renate and her husband (whose name I didn’t catch) are Swiss, and have been travelling for the last 12 years.  Amazing.  Unfortunately, we didn’t manage to see inside their vehicle, but it was rather impressive from the outside.

We reached Perpignan late in the day, just as the end of season party was underway at the campsite.  Fresh sardines were the order of the day, and African GirlChild put aside her dislike of sardines, and tried one.  Delicious!  I even managed to avoid the rookie error of eating the head and tail (which were still attached).

Our own dinner was prepared rapidly in the winds, before Viking Explorer struck upon an idea – let’s make like the polar explorers.  They don’t stand around outside in the cold … they get themselves inside.  And so, with the winds blowing, we set up the ground tent and spent our short evening playing cards and backgammon, and catching up a bit online (free wifi!).  Double sleeping bag required for the night!  Summer inside winter 😉 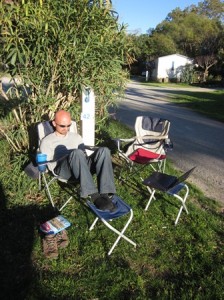 The next morning we woke to glorious sunshine!  We couldn’t have wished for better weather.  The wind map (on said clever website) had said the winds would calm at lunchtime, but a mere breeze was rustling the morning leaves.  Bliss.

We had this strange feeling – “We made it”.  We were ahead of the weather, at least for a day or so.

Today has been a lazy day, the other type of favourite day while we are travelling.  We chatted to the other campsite residents.  Most of the remaining residents are longer term, and the atmosphere is very friendly with a community feel.  There is a real mix of nationalities: French, Dutch, British.  Everyone was interested in our trip, and offered their help and knowledge on our trip through Spain.  We strolled 15 minutes into the near village to buy fresh fruit and vegetables at the local market.  Then, strolled 45 minutes into another village to purchase a map.  Ah – the luxury of time on hand!

3 Responses to Charging across Europe