When you book your chimpanzee permits, they do tell you that you have a 90% chance of finding the chimpanzees.  What I think most people choose to ignore, is that it also means there is a 10% chance that you will only enjoy a walk in the forest.

Up early in the morning, we piled Tom and Jemina into the car with us – pretty cozy, but still nowhere near as overloaded as other vehicles on the road! – and set off from our campsite at Chimpanzee Forest Guest House for the park office in Kibale National Park, about 8km away.  On the way into the park, we managed to see a few primate inhabitants of the forest – L’Hoest Monkey and Olive Baboons.

We were the first to arrive at the meeting point – not wanting to be late of course – but shortly afterwards, the safari vehicles started arriving and dropping off their clients.  We were broken into human groups of 6 and assigned a guide.  The 4 of us were joined by Dana (American) and Olivier (French).  The briefing from our guide, Silver, was fairly short and sweet.  Please don’t eat in front of the chimps, don’t imitate their calls (you have no idea what you might be saying!), keep noise to a minimum, and keep together as a group.  There were a few other odds and ends, but very soon we were ready to walk out into the forest. 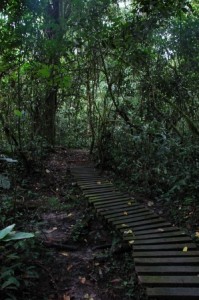 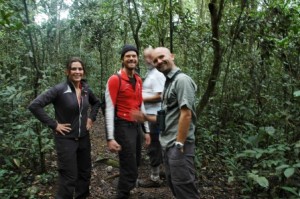 The forest has been preserved beautifully, one of the few habitats left for chimpanzees.  The trees are tall, extending almost 40m into the air, and the forest floor is moist beneath our shoes.  As we follow Silver down the well-used paths, and over several boardwalks, we can hear the calls of numerous monkeys and lots of different birds … but no chimp sounds.

There are no trackers who head out in the morning to find the chimps.  Each guide is armed with a radio and they keep in contact as the different human groups spread out in the forest.  We follow the paths, and stop to look at some monkeys along the way.  They are high in the forest canopy, and hear us humans coming!  We watch as they hide behind leaves, or leap from tall tree to tall tree … we struggle to keep up with them and quickly give up.

In the meantime Silver is in contact with the other guides. An hour after leaving the park office, one of the guides seems to know the direction the chimps are moving in, and so we head off at a brisk pace to see if we can intercept them.  This is no business for paths – we head straight into the undergrowth: climbing over logs, dodging bushes, avoiding the swampy bits underfoot.

Silver is back on the radio.  It seems the chimps have disappeared.  We wait a bit.  Then we decide to keep moving. In hope.

Backwards and forwards between the guides.

We are looking dangerously like the 10% enjoying a forest walk.  It has been 2 hours since we started.

In hindsight Silver had a little more information than he shared with us.  Shortly after I almost gave up hope, we arrived at a spot in the forest where another human group were all staring into the canopy with long telephoto lenses and binoculars.

High up in the canopy, we saw the alpha male of the chimpanzee troupe.

He was sitting watching the spectacle unfold below, seemingly unperturbed.  Every now and then, he turned away and all we saw was his back.  Then he would turn back to gaze at us.  As curious about us as we were about him, clearly. 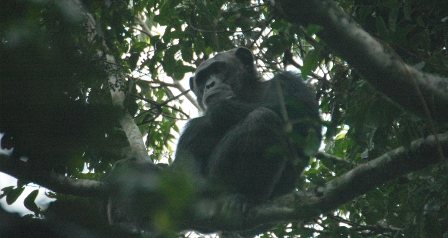 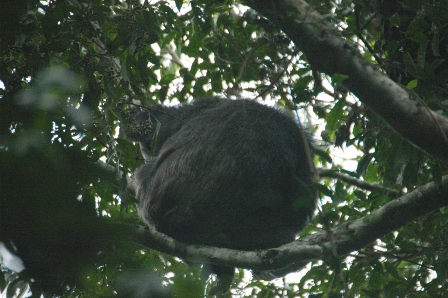 About 20 minutes later, a female chimp with a youngster (6 years old) emerged from a nest in the canopy.  The young are reliant on their mothers for food until 6-8 years of age, and remain with her until age 11.

The male energetically called her over, and a long grooming session took place.  Silver told us that she was in heat, and the alpha male had separated her from the troupe to “court” her.  Her youngster must have been becoming more independent, as it seemed that she was ready for a new baby.  Although these 3 were alone, the rest of the chimp troupe probably wasn’t that far away. 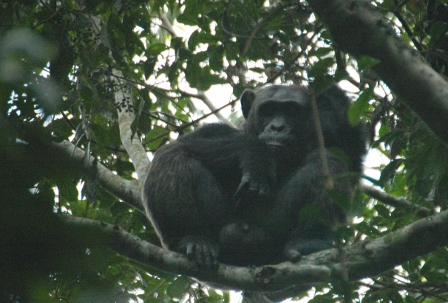 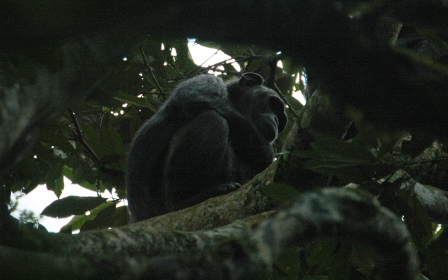 We spent about an hour in total gazing into the canopy 40m above, watching the grooming and courting.  It was so special to spend time with these marvellous creatures, even at a distance.

Then, we turned, and Silver guided us back to the park office – another hour away through the magic forest scenery.

All of us grateful that we are part of the 90%.