Near to Fort Portal, and before you reach Kibale National Park, there is a very special area dotted with small lakes.  This is the crater lake area of Uganda …

From Fort Portal we drove the 20km or so to the lake that we had chosen to visit – Nkuruba.  This has been recommended by Juan and Sarah, as well as Suzanne and Paul.

The Nkuruba Community Campsite is located on the rim of a small lake, which lies about 40 – 50m below, down steep slopes.  We came up the steep road in a light rain and arrived on a beautiful green lawn – and immediately saw a GB registered Toyota parked with rooftop tent erect!  We had found Chris and Julie of Osiyeza. 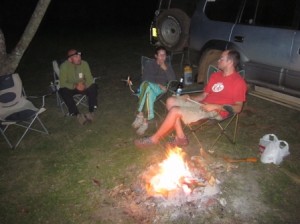 Viking Explorer had been in contact with them much earlier in the year, and we did wonder if we would meet them along the way.  They have come down the east coast of Africa, and are heading towards Cape Town.  We spent a most enjoyable afternoon doing what travellers do best: comparing notes, sharing travel experiences, swapping useful information and generally relaxing in each other’s company.

We also marvelled at the breath-taking surroundings.  This little lake is one of the few lakes in the area that still has pristine, untouched natural forest.  Most other lakes have had their forests removed and the land has been turned into farm land by the local villagers. 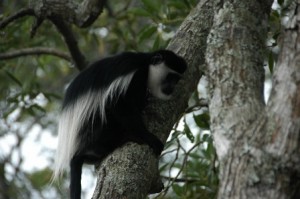 There are still monkeys in the area, leaping from tree to tree, playing on the branches.  Aside from the annoying vervet monkeys who are unconcerned by arm-waving humans, we were treated to sightings of red colobus monkeys, red-tailed guenons and were spoiled when a troupe of black-and-white colobus monkeys passed through camp one day, stopped to feed. 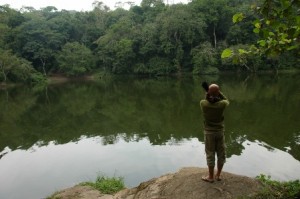 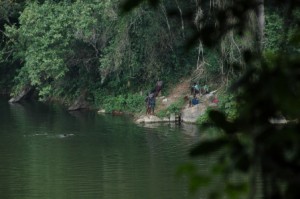 The setting is so peaceful and serene.  Aside from the frogs calling from the lake below, and the great blue turacos shouting from the treetops as they fly through, we could hear the peals of laughter bouncing off the crater walls from the local children swimming and playing in the lake below.

We woke one morning to mist and a light drizzle.  The weather is certainly cooler here, with rain even in the dry months.  But, it was magic.  It honestly felt like we were in the clouds!  Just gorgeous. 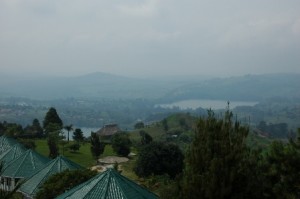 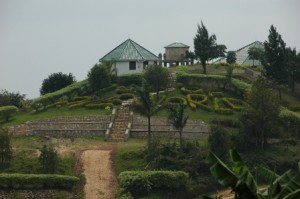 We took a walk up to Top of the World.  The path leads you through some of the farmlands, past a church and then finally up a steep hill.  There were children who greeted us along the way.  Some were interested in the birds we were looking at.  One girl asked for books and pens.  She was carrying a toddler on her hip.  She couldn’t have been older than 17 or 18 and was still trying to complete secondary school.

The views from the top of the hill were stunning.  There is a new resort being built there, including a campsite and modern ablutions.  The restaurant area has an almost 360 degree view – including views of 3 crater lakes.  Definitely a place worth visiting again when it is up and running. On the way down we were stopped by four young boys who wanted their photos taken. Not often we get that request so we quickly used the opportunity to secure some portraits. 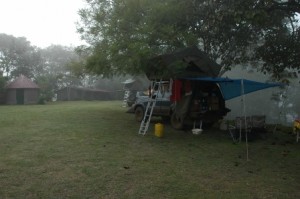 The local community run the campsite with pride, and the price was just right.  Every morning the grass campsite is swept of leaves, and water carried up from the lake below to ensure there is water for everyone.  The buildings are in good repair, and we were thankful for flushing toilets and a bucket for showering.  There was such care taken to keep the campsite and bandas in good order, and we supported the initiative not only by spending time there, but also by buying some of the locally produced crafts.