Our last rest day at Kipili wasn’t really as much of a rest as I had hoped – between chatting to people and cleaning, the day flew by far too fast.  I was determined to get this one at Kigoma right!

We eased into the morning – on the lake shore once again, this time at Jakobsen Beach Camp.  The birdsong woke us as soon as it started getting light.  No other sounds of human activity were around.  We eased into the day.  This area is full of history: the village of Ujiji, about 8km away, is the place where Henry Morton Stanley – a journalist from New York Herald – finally tracked down Dr David Livingstone – an explorer / missionary who discovered and documented so much of southern and eastern Africa.  In 1871, this was the location Stanley uttered the immortal words “Dr. Livingstone I presume.”  It was a place that had to be visited! 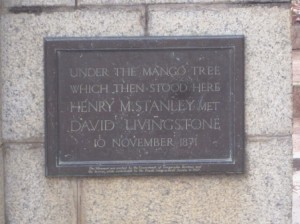 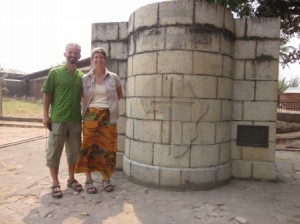 I think our first shock was the pricing of the museum: foreigners being charged 20 times the price that East Africans are charged.  But, like many things in Africa, negotiation is the name of the game.  Only, we didn’t realise we were in negotiation!  While standing outside the museum, we were suddenly offered half price entrance … and half price again!  Finally at a level we thought reasonable, we paid and took part in the guided tour.  It was very interesting to learn about Livingstone’s 3 explorations into Africa and his anti-slavery efforts.  We’ll certainly read up more on this great man.

Suddenly, it was lunchtime and we returned to Kigoma to have lunch at Sun City!  Tables were full, but we joined a really interesting chap – Alex – at his table.  He is involved in primate research in the area we travelled through to reach Kigoma, and we enjoyed a lively discussion while tucking into pilau rice.

We finally found an internet café – hilariously called “Baby Come ‘n’ Call”!  It was hot and stuffy inside, and sweat beads trickled as I settled in, but they had new desktop PCs with speedy internet at a sensible price.

Then we headed over to the produce market for a few essentials.  We picked up fruit and vegetables – avocados and pineapples were our special finds – and managed to select a piece of Tanzanian fabric from one of the many many shops selling many many swathes of fabric. 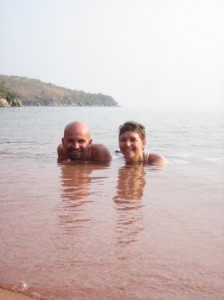 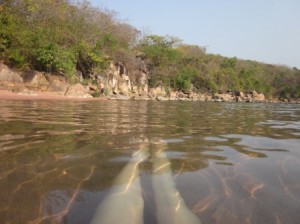 By now, we were hot, sweaty and starting to become a little grumpy – a swim in the lake was our solution!  We returned to the campsite and flung ourselves into the cool water. 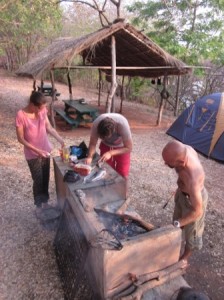 That night, we shared a dinner with Sebastian and Amelie – German students who are travelling through Tanzania on public transport.  They thought it would be the easiest African country as their first sojourn into Africa, and were genuinely surprised when we said that Tanzania was the most difficult for us so far.  They had little by way of cooking equipment, and so we joined forces to cook delicious fresh fish from the lake over an open fire.

So, we failed miserably at having a restful rest day – but what a fantastic day we did have!

2 Responses to Dr Livingstone I presume