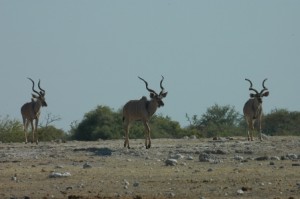 We are suffering from a bit of sensory overload after three days in Etosha. It is not easy to describe the scenery, the vegetation, the vastness of the Etosha Pan, or the animals we saw. Or the numbers of animals we saw… 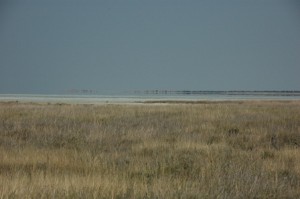 Etosha National Park started out in the early 1900s as a 90,000 square kilometre park, but the last century has seen it reduced to the current size of just under 23,000 square kilometre. The park is tourist friendly, with a good network of gravel roads, natural and man made watering holes, and three nice campsites. There are also lodges in the park, and a number of private lodges and guest farms surrounding the park. 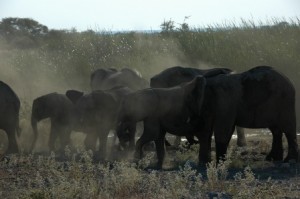 Our route took us into the park from the Von Lindequist Gate. We spent the first day in the Namutoni area, exploring the surrounding waterholes. We were pleasantly surprised by the number of animals in the herds we saw – and it was only the start. There were big herds of springbok and zebra in particular, and there were also larger herds of gemsbok than we have previously seen. There were also herds of black-faced impala.  At lunch that day we picked up that our neighbour had seen lion at the Kalkheuwel waterhole, about 20km away. Unfortunately, they were not there when we arrived on our afternoon drive. We were, however, treated to about 10 giraffe drinking there, and to about 25 elephant drinking at the Koinachas waterhole on the way back to camp. 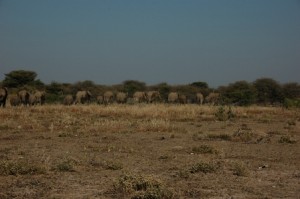 On day two we drove from Namutoni to Halali. Again, we stopped at the Kalkheuwel waterhole, just in case. Good decision! 6 lion lounging about, full tummies, still some blood left on their faces. Didn’t even bat an eyelid as we arrived and parked amongst the other vehicles. I think we sat there for an hour before they moved off. As we were heading back towards the main road, we spotted a herd of elephant heading towards the waterhole. We turned and went back, and 10 min later they arrived. The herd was about 30 strong. About 15 min later a second herd of elephant arrived, also about 30 strong. We were now watching between 50 and 60 elephant drinking less than 20m away from us! Awesome. 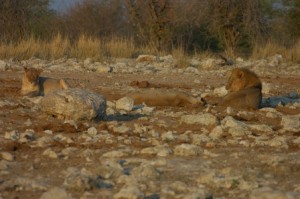 In between watching the elephant and the lion we were also treated to two Gabar Goshawks, a Booted Eagle, and a Pale Chanting Goshawk. They were all just in the trees around the waterhole, watching what was going on. 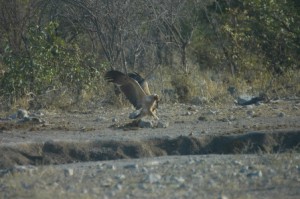 Our next surprise came at the Goas waterhole. As we arrived we saw a few vehicles parked, all facing and looking towards the trees – they were watching three lion dozing in the shade. As we were positioning ourselves to get a good look the one lioness took off in pursuit of a young impala ram. She did not go too far, though, and her chase did not yield any results. But it is exciting to see a lion in full hunting mode. 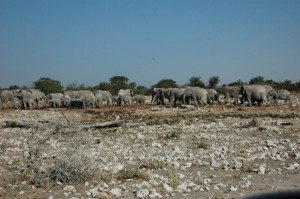 At Halali we went to the local waterhole for the afternoon. As we arrived there was very little life, but after about 30 min a rhino appeared. A black rhino. Wow. We sat there watching it for about 30 min while it drank – and chased two impala rams away. Later that evening I went up again for a quick look. A herd of about 20 elephant were drinking. And then another herd of about the same size came in. A bit of trumpeting and flapping of ears and all was ok. Then – and this was magic – six black rhino came out from between the trees and wanted access to the waterhole. Black rhino charge first and ask questions after – and there is no love at all between elephant and rhino. This could be interesting… The rhino mock-charged, and there was a lot of huffing and grunting, trumpeting and flapping, running around. Eventually, after the dust had settled, half the elephant had moved off back into the bush and the six rhino were drinking next to the elephant that remained. In all of this, I don’t think many noticed the spotted hyena that arrived at the waterhole just to find itself in the middle of a stand-off. It quite wisely decided to move off and come back later. 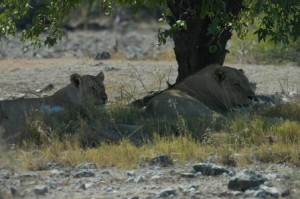 The next morning, on our way from Halali to Okakouejo we stopped past every waterhole on the map. Not much water at the first few, but at the Nebrowni waterhole there was water. And life. Probably nearer 300 springbok and 50 or so gemsbok. And a spotted hyena; the second for the day after we saw one at an earlier waterhole. This was also after we had passed a herd of more than 300 zebra. Neither of us have ever seen herds this size before – a real treat.

We were now getting tired from the heat and from three days of magic, so we decided to exit Etosha and go to our next campsite outside the park.

So long Etosha, we might very well see you again.