After the poor experiences of National Parks in Senegal, we were looking forward to visiting the wondrous parks of Southern Africa.  Kruger Park is a real favourite of ours, and particularly the opportunity to enjoy walking through the bush – with guide of course. 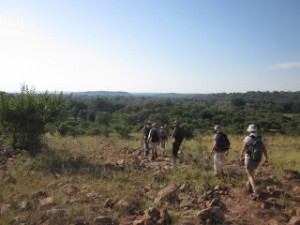 Walking is – for us – the ultimate way to experience the bush.  It allows you to engage all your senses: hear the symphony of early morning bird song; feel the grasses as you walk through the grasslands; smell the warm bodies of animals having passed by; see the smaller creatures of the bush – insects, spiders, snakes; hear the grunts of the wildlife; feel the rush of adrenaline when seeing big animals; stand in awe of the beauty of nature.  For us – this is Africa.

Anyway, for my 40th … errr .. 21st birthday I was given the fabulous gift of us attending an Ecology course, run by Ecotraining, in the Makuleke Contract area in northern Kruger Park.  Very exciting, so off we went.  Vehicles were left at the Pafuri entry gate, and us “students” were collected in an open topped safari vehicle and driven to the rest camp that was to be our base for the next 6 nights.

The rest camp was basic but with luxury in all the right places.  The tents were large 2 man canvas tents with 2 beds and a simple bathroom.  The top of the tent sides had been replaced with mosquito net, which helped to keep the tents cooler in the 37C heat!  The bathroom was for safety reasons: with the camp being unfenced, animals tended to roam through during the night.  Needing to wander around in the dead of night in search of a loo could result in coming eye to eye with a new ‘friend’.  Meals were also provided and everyone eats together.

And by everyone, we mean a continuation of meeting interesting, friendly people.  Not only the group on our course, but we arrived as another group of guides were completing their Trails Guide course.  There are also people based at the camp long term – as a placement after their 6-month guide course – and of course those who are running the camp.  Everyone, without fail, was welcoming and inviting.

Our days were long but rewarding. We were awoken each morning with the drums beating at 5am.  This is the most beautiful time of the day – the dawn chorus starts as the birds wake up, the air is still cool, and promise of an exciting day lies ahead.  A quick cup of tea with rusk, fruit or cereal is a must before a 3-4 hour walk.  By 5:30am we are on our way!

Most days, we drove to a spot and walked from there.  This allowed us to explore different habitats and vegetation, study the diversity and see for real what we were learning in lectures.  We headed off in a single file line, lead by 2 armed guides.  This is Big 5 territory afterall, and safety is paramount.

At the end of the walk, we were treated to tea, coffee, juice and biscuits at the vehicle, before returning to camp.  Never fear, breakfast was waiting!  The cook – Lucy – did an amazing job of keeping variety in this and other meals.

After breakfast, a short lecture.  Our lectures covered the geology of the region, the topography and how that – together with the climate – influences the soils.  The soils influence the grasses and vegetation, which in turn influence the wildlife that lives there.  It all fits together so neatly.

By then, most people were in need of nap – well, at least this explorer certainly did!

By mid afternoon it was time to do it all again – lunch was served, and out for an afternoon walk.  The walk finished off with sundowners at the vehicle – a very South African tradition.  There is nothing like watching the sun set, with a cold drink in your hand after the heat of the day has broken, watching and listening to the early evening sounds, and savouring the experiences of the afternoon walk.

Back to camp – and yes, more food.  Like other meals, dinner was served around a communal table with everyone reflecting on the events of the day. Exhausted, we flopped into bed, just as the frog sounds started, and hyena and baboons could be heard in the distance.

Despite being on foot, we still saw 3 of the 5 Big 5.  At the end of one of our afternoon walks, while enjoying sundowners, we saw a breeding herd of about 9 elephants, including 2 babies.  We watched them from a safe distance for about half an hour.  We encountered numerous herds of buffalo – one herd of more than 100 we watched from the safety of a rocky outcrop as they prepared to settle down for the night.  And a very special siting of leopard as we drove back from our last walk … a first for both Kapp2Cape explorers.  In addition, we saw giraffe, impala, zebra, monkeys, baboons, kudu, nyala, steenbok and positively identified almost 100 birds.

We also saw the evidence of the extreme flooding of January 2013.  In 24 hours, a year’s worth of rain fell.  The Limpopo and Luvuvhu Rivers flooded, and Pafuri Rest Camp was all but washed away. The height of the river and spread left debris almost 20 meters above normal river level, and hundreds of meters from the river course.  Trees were knocked down, rocks moved and sand deposited in thick layers.  The power of Mother Nature is not to be under estimated.  The damage to the habitats will take years – if not decades – to restore.

It was a most enjoyable course, and together with the educational aspect, made it such a truly special week in the bush.  We’d encourage you to take a walk in the bush – with a guide of course – if you have the chance.  Feel free to contact us for more information about our experiences and our guides.

We cannot display this gallery
This entry was posted in National Parks, South Africa. Bookmark the permalink.

2 Responses to Exploring Kruger on foot