And just like that, 5 weeks had passed, and we found ourselves back in Lilongwe, getting ready to leave the Warm Heart of Africa. 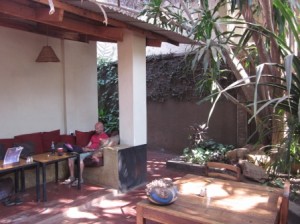 Our last stop in Lilongwe was primarily to pick up provisions more easily obtained in Malawi (paw-paw anyone?) and replace the relay switch so that our headlights function correctly.  Last, but not least, African GirlChild was in need of a haircut, again. 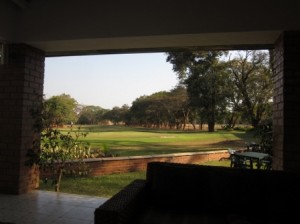 While we had originally planned to stay at Mabuya again, we eventually opted for the Golf Club just down the road.  Here, we were treated to a quiet campsite, lots of lovely green grass and access to the clubhouse! 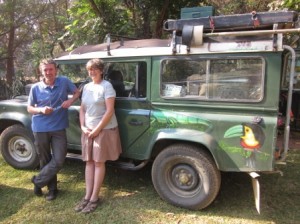 Here, we met Annette and Joachim, a German couple who drive German speaking clients in their 2 Land Rovers on 2-3 week trips in southern and eastern Africa.  When we met them, they had just dropped off 5 people, and a few days later – after some well deserved R&R – were picking up another 6.  This group would be heading north in Malawi, visiting the Lake and Vwaza Marsh National Park then crossing into Tanzania and finishing in Dar es Salaam.  They have done this for a few years now, and we were quite intrigued by their way of funding ongoing travel in Africa.  Food for thought. 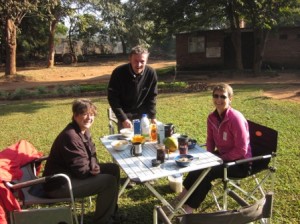 They also published a book from their first trip in southern Africa, which they had a copy of for us to peruse.  We picked their brains about this too, and are feeling more confident and excited that we’ll be able to manage something similar when the time is right.

We enjoyed our brief time together – sharing meals and chatting in the sun.  We hope to bump into them again on the road.

We were treated to local music while in Lilongwe.  One afternoon, we enjoyed the relaxing music of a local guitar trio while were having a drink at the Kiboko Hotel.  It was a mix of some local Malawian music and covers of more popular western tunes.  We relaxed, listened, caught up a bit on internet, wrote postcards and had a drink or two.  Fabulous. 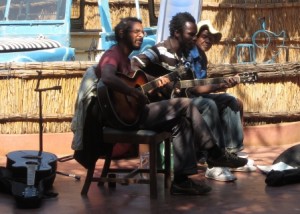 The next evening at the gold club, a local reggae artist was in concert.  The proximity of the concert venue to the campsite enabled us to enjoy the support acts in the afternoon and the main band – the “Black Missionaires” – in the evening.  Very good music, which we both enjoyed.

And so our time in Malawi came to an end.  We headed back to the border at Mbwami to cross back into Zambia – northwards to Lake Tanganyika!

2 Responses to Final days in Lilongwe