Posted on November 17, 2012 by African GirlChild

I am in a good mood today! I went off-road with Brodie. Not the normal UK “pay and play” day, and not the offroad playground you find in the Alps (Val d’Isere being an example). No, this was the real thing. If you want to have a look at where this piste is, find Gorge de Todra on the map, and look for the track that joins it with Gorge de Dades – roughly 30km up from the main road that joins Tinghrir and Boumalne du Dades.

The day started at Lac Tislit (about 80km north of where the piste starts), where we had spent two nights on the lake front under the watchful and very hospitable eye of our hostess. We had decided to go up to Lac Tislit using Todra, and back down using Dades. At the village where the intersection is, we asked if the pass for the “main” road was open, which was a good idea since it is at 3000m altitude and the snow was still on the ground at 2300m. The pass was not open. Plan B: try the track that joins the two a bit further down the valley. We found the piste using Tracks4Africa on the GPS and headed up a very rocky track. After a few km we met the main track. This was hard packed soil and had concrete river crossings and small bridges – definitely the work of the highways people and a good sign for us – at least so we thought until we reached the river flood plains… Here the road disappeared and was replaced by a rough track following the river bed (rest assured: the river was dry). We must have driven in the river bed for about 10km before we rejoined the track that was supposed to go along the river – when the track was still there and not washed away by the flood that is. The track now started climbing switchback up the mountain side, crossing creeks at regular intervals. In the shady spots we touched the last remnants of snow and it was clear that it was at least a week since the last vehicle had passed, judging by the hoof marks from the donkeys. 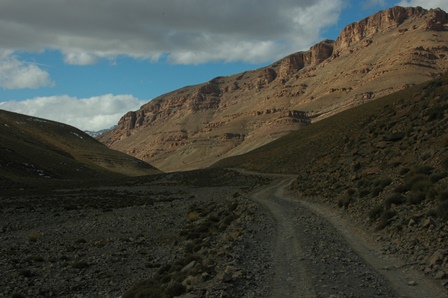 Almost exactly half way we crested the col. What a view! Stunning landscapes as far as the eye could see. And no one in sight. What had been a very barren and rocky landscape turned more fertile and less rocky, at least for a while. The creek we started following turned into a riverbed (also dry), and we had a super descent driving on the river bed. The last few km consisted of a lovely track of hard-packed soil with a colour very close to purple.

So how did Brodie do? He didn’t miss a beat! The new upgraded coils made him very stable and smooth and I never really feared that he would bottom out. The low range worked perfectly, and Brodie ate up all the rocks and bumps and cracks and twists the track threw at him. With ease. He never really worked up a sweat at all. This gives me great comfort for the many rough roads we’ll encounter further south. And best of all: African GirlChild had a smile on her face.

For a little 2 minute glimpse click Todra to Dades video

This entry was posted in Morocco and tagged Gorge du Dades, off-road. Bookmark the permalink.

6 Responses to Going off road