When I woke his morning, I was reminded of the last time we spent New Year’s Day adventuring. We were in Mauritania heading for the border with Senegal, 3 months into our African Adventure.

This time was quite different. Instead of waking early, packing the vehicle in the dark, and driving through the deserted streets of Nouakchott southwards, we woke late, and juggled the day to day issues so wonderfully absent on the long trip. I discovered the cat had barffed on the bed and so my day started with an unscheduled changing of bedsheets and a load of laundry while packing the car. After taking our bags and boxes to the car parked in the basement, having a quick shower and breakfast, we could set off on our camping adventure. Before we really got onto the road, we quickly stopped past the dry cleaner to drop off dry cleaning required next week. And then, just before we joined the motorway, we realised we had forgotten the cooker – quick return home to collect.

Our aim for the day was to drive north through the emirates of Dubai, Sharjah, Ajman and Ras Al Khaimah to reach the border with Oman. This area of Musandam is isolated from the rest of Oman. It is famous for its fjords and mountains, known as the “Norway of Arabia”. We had planned to visit in December with visiting friends, but when they fell ill, we cancelled the trip.

Leaving Abu Dhabi and bypassing Dubai was easy on the well paved 6 lane roads. Some days it really doesn’t feel like we are living in a desert. We sailed past Sharjah and Ajman – we’ll visit those cities another time – before entering Ras Al Khaimah (RAK). 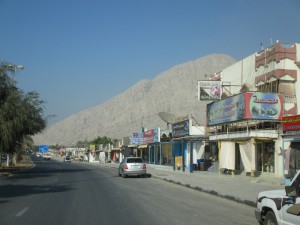 The city feels more like I would expect in this part of the world – almost no highrise buildings or skyscrapers so typical in Abu Dhabi and Dubai. Instead, low level buildings all facing the roads. The small stores had brightly coloured facades, with the occasional store owner (male of course) standing in the doorway watching or chatting to friends. Much more relaxed. One stretch of road had wedding boutiques and other fashion stores down the one side – and car accessory stores on the opposite side! Shopping opportunities for the whole family.

Roadsigns had all but disappeared by this point, and the roadworks everywhere were making for challenging navigation. Eventually we stopped at a small grocery store and Viking Explorer hopped out to get directions from the store owner. He pointed northwards and told us to keep going straight and we would rejoin the main road towards Oman. 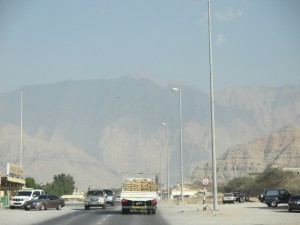 The desert gave way to the mountain ranges typical of the area, and the towering mountains loomed ahead of us. What struck me was how monochrome beige it appeared. Even in the desert, the colours seem varied, and further south in Oman, there seemed to be more variety in the shades.

We arrived at the border post at 14:45. Very late. We still had a way to go. We entered the departure hall on the UAE side and were horrified to see the queues. Actually, queues would be too kind of a description for the general mass of people gathered. While the men queued, their families waited outside. As each family head reached the counter, the families were summoned (another 4-5 people) who needed to squeeze their way to the immigration desk to go through procedures. We waited patiently, but progress was slow. Eventually we changed our minds about the border crossing. This was very time consuming, and needed to be repeated on the Omani side, and the whole procedure again two days later when returning.

Back to the UAE – accidentally upsetting the border officials as we tried to exit the border post designed for entry. I suspect this has happened before, and he good naturedly told us to keep the car facing the correct way, and redirected us back into the UAE.

We returned southwards, and turned into Wadi Ghalilah to see what we could find for a campsite. This wadi (dry riverbed) is also the start of the “Stairway to Heaven” hiking trail. Not for the fainthearted, the photographs alone gave me vertigo let alone doing the trail. 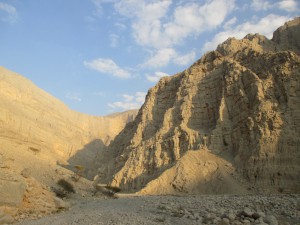 We again encountered a frequent problem we had in Africa – finding a campsite away from civilisation. The wadi flanked on both sides with steep mountains posed challenging for finding a hidden site. We eventually found a suitable spot, although we could see a small settlement across the wadi and were aware of another around the corner. But we were running out of options. As we were dithering, we heard a vehicle coming and Viking Explorer walked over the road to catch the driver and check if we could stay there. The youngster – late teens as best – was all smiles without any English. Hand gestures explained our desire to sleep and eat. Thumbs up indicated it was no problem – but Oyvind needed to have a few photos taken first with the youngster. Westerners must be a bit of a novelty in these parts. 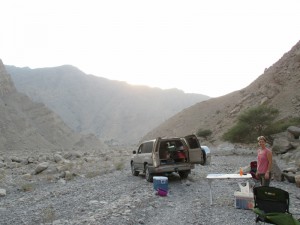 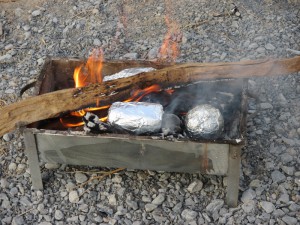 At last, after a long day in the car, we could settle in for the night: light a fire, cook our food and relax.

5 Responses to Heading north towards Oman