Posted on January 30, 2013 by African GirlChild 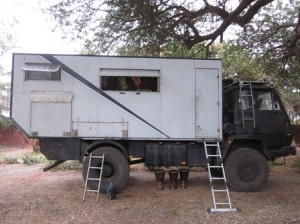 We were sitting behind our car, watching the birds at the birdbath, reading, and listening to the sounds of nature. Then, our campsite was not so quiet any longer. In came more overlanders. Not just one couple, but two couples and a guy.

We have, since our journey started, wanted to meet up with other overlanders. Both to share information with, and maybe to spend some time on the road with. Noel and Ping were our travel companions for a week in Morocco, and we had all intentions of spending some time with Jupp and Doro whom we met at Wassadou. To our surprise, the roads are otherwise very quiet; there doesn’t seem to be very many overlanders around. And further, most of those we meet are either on their way north, or just staying in one country.

Also, since our journey started, we have had a good look at what vehicles other people are travelling in. I think this is natural. It is a topic of conversation, and it is a way to learn. From the top of my head, this is what we have seen:

So, where does this leave us? It certainly seems our vision of old Landies or Cruisers with the Howling Moon or Eezy-Awn fold-out roof-top tents, parked under a Baobab or Acacia in the middle of nowhere is somewhat outdated… Now, it seems travelling is done by truck, or by a vehicle that has a door that can be closed to keep the world out and to create a much more private (and secure?) space inside. Is this a sign of travellers wanting more privacy? Is it an indication of how the world has evolved recently? Or maybe it is both?

This entry was posted in Senegal and tagged Inside, Land Cruiser, Landcruiser, Outside, Overlander, Toyota, truck. Bookmark the permalink.

6 Responses to Inside or outside?