It is a small world! (sans gremlins)

Posted on November 27, 2012 by African GirlChild

(including the missing bits …)

It is a truly small world! Read on, and I’ll get to the point…

We have been in the southern part of Morocco for about 10 days now. It is “dead season” here – right inbetween the two major tourist seasons of late summer (Aug-Oct) and Dec – so there are not too many tourists milling around. After our encounter with Aziz in Zagora (whom Peter from Atlas Overland uses) we had a good giggle about how small the world is. Little did we know.

As described in the previous post we had a fantastic couple of days driving across the desert very close to the Algerian border. We arrived in Merzouga where we managed to fend off half the local population trying to sell us accommodation – of which there is plenty. The number of Auberges and Kashbas around is staggering and because of “dead season” they are somewhat empty. We found ourselves a nice little campsite where we will be staying for a couple of days to do some laundry, some blogging, and some cycling. 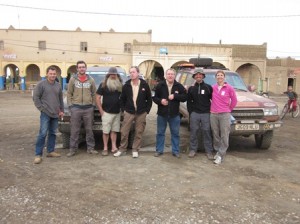 Yesterday afternoon we went in to the centre to do some shopping. Oddly most stores were closed so we only got about half of what we needed. Today, after a chilled morning we headed back in to do the last bit of shopping. Arriving at the town “square” we immediately spotted the two Landcruisers parked there, and the very bearded Frenchman working on one of them. The Cruisers were both adorned with stickers all over, and some of the stickers looked vaguely familiar… I went over to say hello and saw that the guy had a t-shirt with a logo for the Breslau ralleys. This made me make the connection about the stickers: Chris, whom I bought the water tank and the fridge from is also the PR man for the Breslau ralleys. I asked the bearded guy if he knew Chris? “He is sitting over there having tea”, was the answer!

Anyhow, we wandered over, and sure enough, it was Chris.  They were about to head off to continue their recce of the latest addition to the Breslau calendar – Breslau Morocco 2013 in March next year.  They were very keep for us to join in on the event, but we sadly had to decline as we should (hopefully) be in Ghana by then.  Just enough time a cup of tea, a few photos and everyone set off …

So, whenever you find yourself in a small desert town in the south of Morocco, don’t be surprised if you come across people you know.

(PS if you are interested in the event, do check it out here! Breslau Morocco 2013)

This entry was posted in Morocco and tagged Breslau, meeting, Offroad Trading. Bookmark the permalink.

2 Responses to It is a small world! (sans gremlins)