Kampala – setting it all up

We typically avoid major cities on our journeys, but every now and then the admin that needs taking care of necessitates a stay in a capital city – this time Kampala. 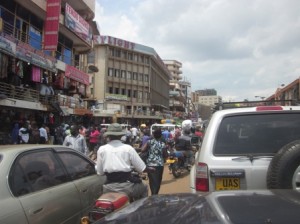 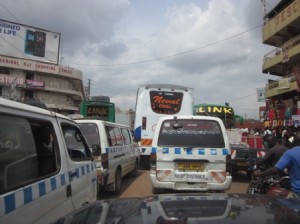 Coming into Kampala we took a straight route to the backpackers Red Chilli Hideaway.  Unknowingly, this took us straight past two of Kampala’s many bus stations.  It was organised chaos!  Or rather, disorganised chaos: people, boda-bodas (motorbike taxis), mutatas (minibus taxis), cars, coaches, and even a truck with a shipping container on the back were all fighting for space on the road.  Viking Explorer was in his element – laughing, manoeuvring his way, hooting, jostling, pushing, shoving.  It was rather comical – but maybe not if you have to battle your way every day.

On the way through the craziness, we noticed that South African brands have made their way this far north: Nandos on once corner we passed; Steers on another corner; and the GPS reliably informed us of a Shoprite nearby.  We stopped at Toyota to arrange a mini-service.  Brodie has been carrying us over hill and dale, and a little TLC will ensure he continues to carry us.  An appointment was booked for 2 days later.

Arriving at Red Chilli, we were directed to the campsite at the back.  As always, we met lots of interesting travellers:  Hein – a South African married to a Norwegian who is planning a lodge at Murchison Falls; Eve & Dries – Belgian overlanders travelling southwards; a Dutch couple with their 2 kids travelling from Amsterdam to Cape Town.  As always, an enjoyable group to spend a few days with.

Next morning we were up early to brave the traffic to the Rwandan High Commission.  Viking Explorer needs a pre-arranged visa, whereas I can buy mine at the border.  While it is possible to apply online, it seemed to be a long time to have it approved, if approval comes.  At the High Commission, the lady behind the counter was initially a bit icy, but Viking Explorer charmed her and soon he even had a smile from her.  After completing the forms, and handing over a passport photo, we were dispatched to Ecobank at Garden City Centre to pay the $30 visa fees and obtain a photocopy of the passport.  Off we went, braving the traffic to the bank, obtained a photocopy at the internet café and returned to the High Commission within an hour.  At this point we were informed we could collect the visa in 2 days time: since we were filing on a Thursday, it meant we could only collect on Monday.  No amount of pleading would entice her to have it ready on Friday. 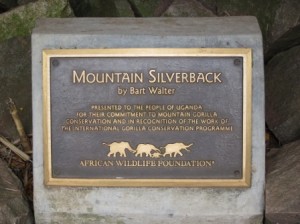 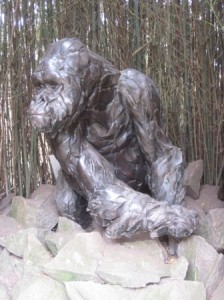 Next stop was the Uganda Wildlife Authority (UWA) where we were spoiling ourselves with permits for both chimpanzee tracking and gorilla tracking.  Dixon and Grace were both very helpful, and after about an hour and a half we had booked dates, paid, and been issued with our permits.  Very exciting!  But certainly dry bread and water for the rest of the trip … 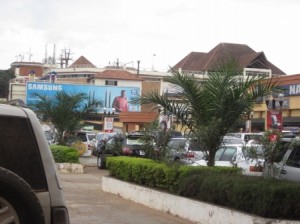 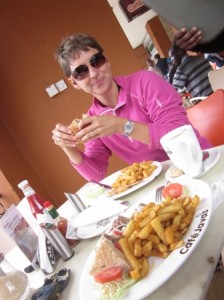 We returned to Garden City centre for a coffee and a light lunch.  Garden City Centre is like any South African shopping centre – aside from the G4S security men checking cars on entry, armed with AK47s. I am unsure if it made me feel more or less safe …  But no-one else seemed to blink an eye, so we didn’t either.

For the first time we had a chance to really relax and take in the surroundings.  We noticed how many other muzungus there were: walking on the streets, at the coffee shop, riding the boda-bodas.  There feels like there is a big ex-pat community as well as more tourists around.  We also remarked that while London has its pigeons, Durban has its mynah birds, Kampala has Maribou storks!  Everywhere!  They are perched on top of buildings, and flying around.  No longer a special bird seen in the wild.

Before heading back to camp, we stocked up on supplies at Nakumatt (supermarket).  With such a cosmopolitan city, the selection was wide and varied, catering to the westerners, those from Asia as well as Ugandans and other Africans.  It was a feast for the eyes and tempting to the tastebuds. 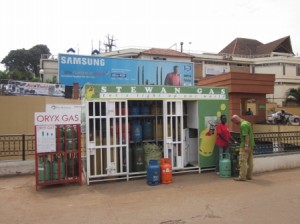 Lastly, we started enquiring about cooking gas.  Our CADAC gas bottles, which have been regularly refilled while travelling northwards, can’t be filled in Tanzania, Uganda or Rwanda.  So, we needed to make the investment in a new gas bottle or live without gas for about a month.  If you know Viking Explorer, not having a morning cup of coffee would be deprivation at its highest degree!  Again, sourcing a bottle was easier said than done – the exchanging gas bottle system relies on you having a gas bottle to start with …

By this stage it was time to return to Red Chilli.  We had set much in motion, and now time needed to pass.