Posted on March 7, 2015 by African GirlChild

As we prepared for our adventure, we wanted to make sure that we could tell our story after the trip. We talked about different ways to do this, and in addition to our website and our blog, a book was high on our wish list of outcomes.

While searching for information on what other travellers had done, African GirlChild came across the Ted Simon Foundation. Ted Simon is a fellow traveller. In 1973 he set out on his own on a Triumph motorcycle, on a journey that took him around the world over a period of four years. In 2001 he repeated the journey, with the intent of finding out how the world had changed. Wanting to encourage other travellers to share their experiences, he set up the Ted Simon Foundation in 2011. Kapp2Cape was accepted as Jupiter’s Travellers just before our departure in 2012. 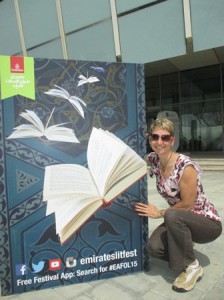 The first talk we went to was about extreme travel, and Ted was on the panel. Extreme travel is not really what Kapp2Cape is about, but it wasn’t so much about the extreme part of travel, more about travelling itself, and how to overcome the ‘fear’ of taking that first step – whether going exploring in your own country or setting out on a North Pole trek.

After the talk we waited patiently at the book signing table for Ted to come along. He was expecting us as we had arranged to catch up with him through the foundation. Introductions were quickly completed, and we had a lovely catch-up over a quick cup of coffee. 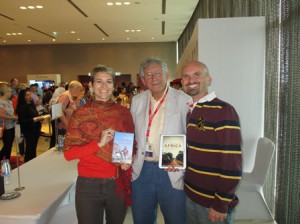 The second talk we went to was ‘Around the Globe with Ted and Charley’ – Charley being Charley Boorman. Charley is best known (at least to us) as Ewan McGregor’s motorcycle companion in ‘The Long Way’ series. It was an entertaining talk, focussing on the differences between the two journeys, both in regards to preparation, reasons for going, and the final outcome. 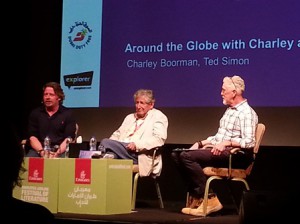 At the book signing table after the talk we met up with Charley and Ted, and Kapp2Cape now have books signed both by Ted and Charley.

And who knows, maybe we will be sitting on a stage at a literary festival someday too …