Posted on October 15, 2013 by African GirlChild

What a fantastic week this has been! First we took part in the Nossob 4x4Eco Trail, and then we explored the park for a few days. The sightings were many and good. 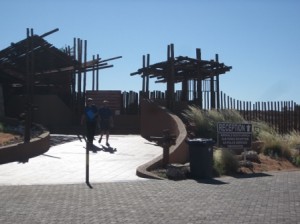 We arrived at Twee Rivieren Gate in the afternoon after starting from Kuruman in the morning and stopping off in Upington for food, fuel, and a cup of coffee. We had already made our bookings so the check-in procedure was straight forward. On the drive to Kgalagadi Transfronier Park we had also decided we wanted to stay longer than just the Eco Trail, so we looked into booking a few extra nights. Fortunately there was space at the main camps – no space at the wilderness camps we had hoped to stay at – probably as a result of travelling outside the main seasons. We headed off to find a stand at the camp site where we had a brief rest in the shade before embarking on an afternoon drive to the closest waterholes. 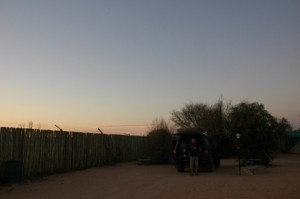 The Kgalagadi Transfronier Park is a park spanning South Africa and Botswana. It is situated in the Northern Cape, wedging itself in between the southern tip of Botswana and the southern end of Namibia. At Twee Rivieren it is possible to clear both SA and Botswana Immigration and Customs if using the Botswana part of the park. It is also possible to enter Namibia using the Namibian Customs and Immigration facilities at the border gate in the west of the park. For the South African part there is a basic road structure in the shape of a V with two connecting roads between the two main roads. Along the roads there are more than 40 waterholes mainly operated by solar power. 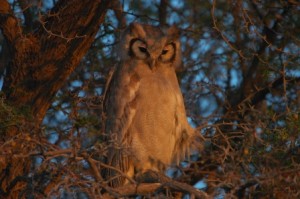 Our afternoon drive took us to the two closest waterholes heading towards the Mata-Mata Camp. Before we set off we had had a look at the game sighting board, and we were hoping to catch a glimpse of a group of cheetah hunting in that area. Unfortunately they were elusive that afternoon, but we did see herds of springbok, gemsbok and wildebeest, and a few pale-chanting goshawks. On the way back to camp we also had a good look at the verraux eagle-owl family nesting in a tree by the road. 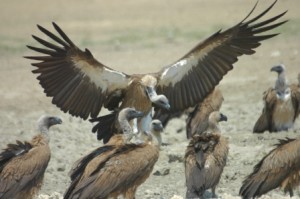 The next morning we were due to meet our trail group at nine – this would give us plenty of time to do an early morning drive. Up at 0500, departing at gate opening time at 0600. Early, but still cool and with super light for early morning photography. We headed back up to the same road as the day before to hopefully see the cheetahs. We were not disappointed. We could sit quietly watching the female teaching her three cups how to hunt. They approached a herd of springbok very quietly, but the springbok must have been spooked by something because they ran off. Seeing their prey run away the cheetah decided to rest a bit more. It was now heading towards meeting time for our trail, so we headed back to camp. 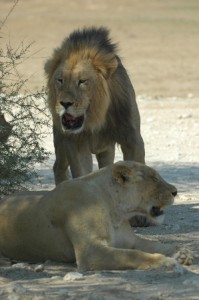 Our trail ended about 60km north of the Nossob Camp. We said farewell to our group, and started our meander south to Nossob. We took our time, enjoying the sights, stopping at each waterhole to scan the surroundings for life and action. At the Kwang waterhole we were handsomely rewarded. On the approach we noticed a log with lots of birds on it. We stopped, took our binoculars out, and had a good look. The log was full of vultures, both white-backed and lappet-faced. Next to the vultures, under a tree, was a male lion. And under the next tree was a female lion. They were still quite far away so we inched closer to get a better viewpoint. There was obviously more to be seen as there were about four vehicles parked at the waterhole. When we arrived there we understood why; one male and two female lion were resting under the tree, panting away in the heat, still pink on face and paws from a recent meal. They had no intention of going anywhere for a long time; we had about an hour with them under the trees. While there, the two other lion came to join, and all the vultures – plus two secretary birds, two tawny eagles and a black-chested snake-eagle – came in to drink. For a period of time it looked like a busy airport with vultures queuing up to land. Magic. 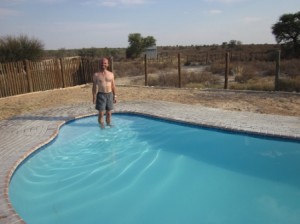 That night at camp we were also treated to a lion roaring just outside the fence. We could almost feel the vibrations in our tent. 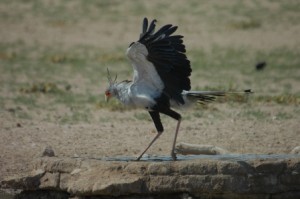 The next morning we left Nossob early to head to Mata-Mata. This also turned out to be a enjoyable drive – although hot – with a total of eight lion in three different sightings. The road we took is called the Upper Dune Road. It crosses between the Nossob river bed and the Auob river bed, traversing the dunes. This provides some spectacular views of an undulating road disappearing and reappearing amidst the red sand and the yellow grass. Mata-Mata turned out to be very hot, a lot hotter than both Nossob and Twee Rivieren had been. Having had some long days in the car we decided to stay put that afternoon, enjoying a cold drink and a dip in the pool (yes, all the main camps have pools!). 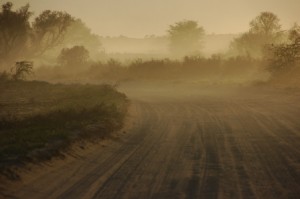 We again departed camp early, hoping to see more lion and cheetah. Again, we were fortunate to see both on our drive to Twee Rivieren, although they were very content to stay in the shade. On this drive, and on the short drive the following morning, we were also treated to some other special sights: pygmy falcon, cape fox, bat-eared fox namaqua sandgrouse with chicks, and a brown hyena. 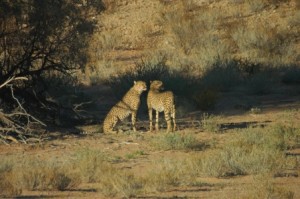 At Twee Rivieren we caught up with a couple we had had a brief chat to at one of the waterholes, and were invited to join them for dinner.  This nicely rounded off a superb stay in Kgalagadi Transfronier Park.

We will be back!