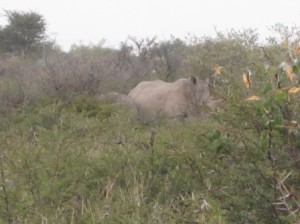 We saw them! The rhino. They are a rare sight these days, but fortunately there are some left. I wonder how long we will still have rhino due to the demand for their horn – and therefore the subsequent poaching – from the Far East.

Khama Rhino Sanctuary was set up to provide a safe haven for rhino. After a bit of a shaky start they are now very successful, so successful in fact that they are used as supplier of rhino to other parks and sanctuaries in Southern Africa. Measuring 8,500ha (4,300ha originally with 4,200ha recently added on in a land swap) it provides plenty of space for the rhino to roam. Fortunately for the rhino, the Botswana Army is patrolling the Sanctuary, making their presence known regularly at the waterholes. 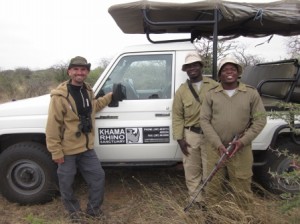 We arrived just before lunch. The check-in procedure was efficient and friendly, so we were soon on our way to our campsite for a bite and a rest before heading out on an afternoon drive. In the car on the way to the campsite we decided that we wanted to take part in the Rhino Tracking walk the following morning – it is an opportunity too good to miss when you are there! At our campsite we were greeted by the two resident Yellow-Billed Hornbills. They took a real liking to Brodie, using the mirrors and wind screen wipers as perches. After a rest we headed out for an afternoon drive, stopping past the bird hide and one of the pans. No sightings of rhino that afternoon, but some lovely sightings of game and birds.

The campsites are large and spaced out nicely, so you are not really disturbed by the people next to you. The campsite itself is situated at one end of the sanctuary, about 3.5km from the main gate. It has shared ablution facilities, while each stand has a braai place, a fire plate, and a stand pipe. All nice and clean and in full working order. It is also clear now that we are in Botswana; there is no fence around the camp site. This of course means that all animals that are in the park, large and small, can wander through as they please. No night-visitors for us, though. 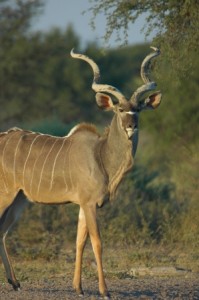 0600 the next morning Store and Ogi came to pick us up at the camp. We were clearly not on African Time, as they said 0600 and they showed up a few minutes early! The idea is to go out before other guests and the morning guided drives go out, so that we can pick up fresh tracks of rhino around the water holes. Then we follow the tracks until we find the rhino… this can take 10min, or it can take a lot longer. Our first tracks led us to a female with her calf. It was a relatively easy tracking – their spoor were clear and easy to follow, as they had stayed on the path we were following. The next tracking was a completely different story – we tracked for more than an hour before we spotted them – a mom with a youngster. This tracking was also much more difficult; we had to backtrack a few times, and we also had to rely on other signs like grass and dung to find the tracks again. It is quite special to arrive at a rhino midden (toilet) to see fresh dung and to feel that it is still hot – the rhino cannot be more than 15min away at that point. Suddenly we see them. The largest must have been about 2m at shoulder height! Enormous. We had a good look at a safe distance, and then headed back. On the way back Store mentioned that we had to pay attention when following the paths in the bush as we could easily run into other game – and around the next corner we came across another rhino. We circled at a safe distance and headed back to the vehicle. A very successful morning. 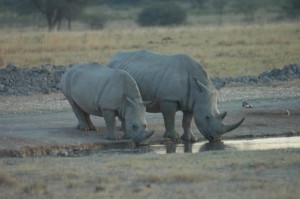 That afternoon we went out a bit early to try to reach the far end of the park from the campsite. All the roads are deep sand, so driving is slow. It was surprisingly dense when we were there, so not always easy to see game. There are, however, a number of pans to stop at where viewing is good. We had a very successful drive with sightings of kudu, impala, zebra, wildebeest, giraffe, steenbok, springbok, and black-backed jackal, and a number of birds. The final stop at the pan also treated us to a pair of rhino coming down to drink. It is magic watching these large animals go about their daily business.

Our stay in the park ended with the final drive the following morning. Although a very enjoyable drive, we did not see any rhino on our way to the gate. We were, however, treated to a herd of zebra arriving to drink at the water hole where we had seen rhino the previous evening. As we had had some really good sightings the previous morning we felt content, and exited the sanctuary on a high note. Yes, it is a bit pricey to camp. Yes, it is a bit expensive to go in. But we have seen that the money generated from visitors is providing a safe haven for these very special animals.

This entry was posted in Botswana, Other Parks. Bookmark the permalink.