This is elephant land!  Every park we have visited has been special in its own way, and on our entry into Makgadigadi we were introduced to the large mammals who would be our constant companions in this and the next parks. 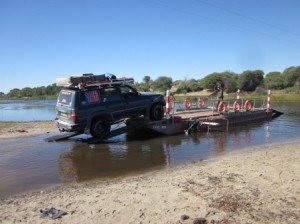 The western entrance to Makgadigadi – Khumaga Gate – requires a typical African ferry crossing.  Much like our experience of crossing the river in Senegal, this ferry was little more than a floating pontoon.  It was only able to carry one vehicle at a time – unlikely to manage to carry anything larger than a 4×4 – across the narrow 100m width.  The ferryman – Otie – was all smiles.  He helped each of us in turn to cross for the requisite fee.

Makgadigadi Pans Game Reserve is a relatively small park – 3,900 sq km – which was established in early 1970s.  It is complemented by Nxai Pan National Park – a further 2,500 sq km – which was combined with Makgadigadi to form one park in the early 1990s.  Together, the parks protect large tracts of salt pans, palm forests, grasslands and savannahs.

As with other parks, the entry procedure was accompanied by smiles and helpful suggestions of where to drive for an afternoon self-drive.  The game tends to congregate around the Boteti River in the dry season, so this was recommended for the best sightings of wildlife.

We didn’t need to venture far at all – after about a kilometre we spotted a herd of 9 elephant on the water’s edge, fortunately some distance below our vantage point on the road.  While “ticking off” the animals we’ve seen is part of the enjoyment of visiting parks, being able to watch their behaviour is very special.  Here, we watched for half an hour as the family herd gradually made their way into the river, bathed and played.  Some elephants disappeared completely under water, while others preferred to walk in until their bodies were half submerged.  Hierarchy played its part – two youngsters waited a long time on the river banks until more senior members of the family had finished.

By now, the sun was high and it was time to make our way the final few kilometres to the Khumaga campsite – complete with flushing toilets, and solar heated water for showers.  Bliss!  We rested up under the shady trees, enjoying a relaxing lunch.

On our afternoon drive we kept to the sand tracks following the river route.  At times, we overlooked the water from a height, at times dropping down to river level.  The landscape looked somewhat apocalyptic: the trees were broken off or pushed over; they looked dead or dying.  It felt desolate – except for the large amount of wildlife present.  Elephants continued to be the theme, and we were amazed by the number we saw, and the evidence of many more by the numerous elephant spoor.  We also saw a large herd of wildebeest on a small plain near the water’s edge, kudu, zebra, and impala.

Campsites here, too, are unfenced, and the previous evening elephant had sauntered through.  That evening, our campsite was visited by honey badgers, who rustled around in the undergrowth not far from the edge of our camp.  No other nocturnal visitors.

The next morning, we headed through the park to exit at the northern gate of Phuduhudu.  Once we were away from the river, the landscape changed as more trees seemed to survive the onslaught of the elephants.  The wildlife was also scarce – clearly staying near to the water.

While I enjoyed our first encounters with elephants, I could not help but wonder if the park has more than it can comfortably handle.  At times, it had the feel of a UK safari park, with many roads and cars taking visitors close to the wildlife.  Our subsequent visits to Moremi and Chobe certainly enforced my feelings of Makgadigadi, and so this would not be a park that I would visit again.

• Makgadigadi Pans National Park lies between Central Kalahari Game Reserve and Maun.  From Maun south to CKGR it is about 100km on tar before you turn off on the sandy track.

• There are no provisions in Makgadigadi National Park, but ablution facilities are clean and comfortable

• Reservations for camping must be done before entering the park. Camping for internationals is USD50pppn. Camping for SADC residents is R250pppn.

• Conservation fees can be bought at the offices for the national parks in the main towns (Maun, Lethlakane, Gaborone, Francistown, Kasane), or you may be able to buy them at the entrance gates. Fees are P120pppd, and P50pd for the vehicle (under 3.5t). Vehicles over 3.5t are charged at P1,000pd!

• 4×4 is essential. You cannot explore the park without good ground clearance and low range. Tracks are sandy and narrow.