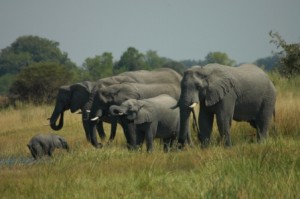 Elephants. Not just a few – many. Not just one herd – many.

It is funny how some places appeal to you, and some don’t. Moremi really appeals to both of us. It is a lovely mixture of forest, grass, plains, and water – both river and water holes. It is a peaceful park. Although there are other vehicles around it doesn’t feel cramped or busy. And it is teeming with life.

Moremi Game Reserve lies north of Maun. Maun is the tourist centre for Central Kalahari, Makgadigadi, Moremi, and Chobe. From Maun Moremi can be entered from the south, giving access to the middle part of the park. We entered from the west at the Maqwee Gate, giving us access to the camping areas of Third Bridge, Xakanaxa, and Khwai. Moremi was established in 1960 and encompasses 3,000 square kilometres, and is one of the best places to access the wildlife of the Okavango delta. 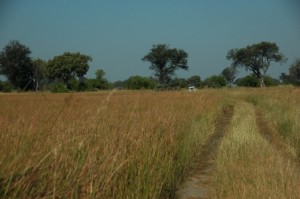 I think it took us about five hours to reach our campsite at Third Bridge once we had cleared the gate formalities. There is a “main” road (sandy) that heads relatively straight to the camp. We took the scenic route that took us closer to the Okavango – and therefore in theory closer to the animals seeking water. We were rewarded handsomely! At one spot we rounded a corner and saw a herd of elephant drinking very close to the road. We stopped the car in the shade about 200m away and just observed. They were in no rush, and I think we sat there for about 25min before they moved off. The same happened only about 5km from camp, where three successive water holes had a herd of 15+ elephants at each. We found our friends at Campsite 1 and sat down for a well deserved lunch. 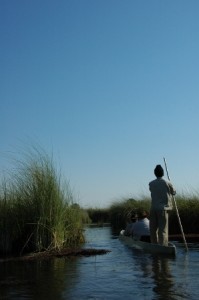 Campsite 1 is situated so that it overlooks a small pool in the river with a pathway leading up to a grazing area for hippos. It is therefore also a destination for the guests at the other campsites, as it provides good views of hippos. We met many friendly people that afternoon, while we decided to stay put and not go out for an afternoon drive. Just before we turned in for the night we were also rewarded with two hippos coming out of the water to graze just 10m from our campsite. They knew we were there so just ambled past while grazing quietly. A superb end to a superb day.

Scott and Karl’s faces were priceless when we showed them the photo of a mokoro. There was also much giggling and banter as we all settled into the two mokoros for a two hour trip in the waters of the Okavango. Sitting so low down gives you a different perspective of the marsh lands, and you never know what is around the next corner of the maze of waterways. It was a quiet morning, and two very peaceful hours on the water. 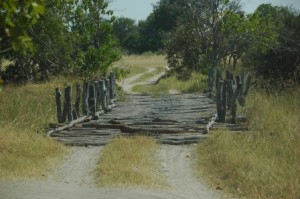 Camping in the wild has its own rhythm, and it is seldom this rhythm is disturbed. Wake-up usually happens from about five, and set-off is at sunrise or just before. Mid-day is spent in the shade, and afternoon drives start from about four. Driving ends at sunset, with the camp fire coming to life about the same time. Usually, the camp is quiet at ten at the latest, sometimes as early as nine. At ten that evening we had to get up and walk over to our neighbours – a party of five vehicles from SA – that were still finishing their dinner and large amounts of beer and wine. Apparently they had booked both campsites 1 and 2, but since we were in 1 they had to cramp into 2. Their excuse was that they had arrived late, but they did turn the volume down, and about 30min later all was quiet.

From Third Bridge – which is a series of poles laid out over mud and water – we headed east towards North Gate and Khwai. As with the road in to Third Bridge, there is a “main” road and a series of tracks leading closer to water. After a few trials and errors (seasonality is badly reflected on a GPS) we found the elevated viewing platform overlooking Dombo Hippo Pool. We saw hippo, and an African Darter using the one hippo as a diving platform. 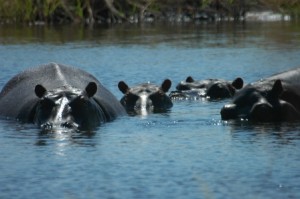 North Gate campsite is just inside the park at the Khwai gate, right next to the river. Although we did not have direct view of the water, it was clear we were on a game path leading in that direction. There was elephant spoor on the ground from earlier that day, probably from the elephant we could see in the distance. A decision was made to move the car to the other side to avoid conflict later. As we were about to eat dinner we heard rustling in the bushes next to us – and a few moments later a large elephant emerged about 50m from us, using a tree as a scratching post. It is a fascinating sound – a loud, dry, rasping.

That evening gave us another treat: we were about to close the car to go to brush teeth when we heard rustling again. Big torch out, I swung it in the direction of the sound. I think the hyena and I both got an equally big fright! It was not even 10m away, its eyes shining red in the beam of my torch. It quickly hid behind a bush, observing us. When I lowered my beam it came out again. Eventually it moved off down the road, no food found at our campsite. I like ending my days with these types of experiences, and it was a very nice bonus to our stay.

Moremi is a park we will return to!