Posted on December 19, 2012 by African GirlChild

Just under a week ago we left Agadir to start our journey towards the Mauritanian border. We had a choice of going down the coast via Tiznit, or venturing into the mountains via Tafroute. As we would be following the coast from Laayoune southwards, we chose to go through the mountains. What a good choice! At our campsite just north of Agadir we met some Germans, and we copied a piste from one of their guide books. After stopping off in central Agadir for some provisions, we hit the road to the mountains towards Tafroute.

It started off gently, with sweeping curves and panoramic views, until we reached Ait Baha where the piste turns off to the right. We asked the fuel attendant for the entry to the piste, expecting a “behind that house over there”, only to be told that the piste is now tar! 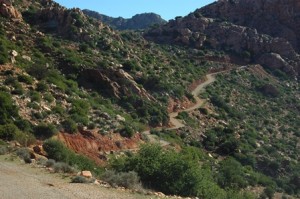 After a few kms we turned left towards Aougounz and started heading up into the mountains proper, the road taking on a very serpentine quality. I quickly lost count of the number of hair pin turns, instead focussing as much as I could on the fantastic scenery we were driving through. I cannot remember how many times we went up a switchback just to go down one on the other side of the col, but there were many!

As we entered the village of Targa n’Touchka we stopped a man by the side of the road to ask for directions to a place to spend the night.  The village has an unofficial camp site that is used by people climbing and trekking in the mountains, and this is where we were shown.  We were lead through the souk and up twisting roads of a small hillock.  Suddenly, we emerged above the trees – on top of the hillock surrounded by mountains on all sides.  It will be a long time until we wake up to a similar panoramic view. 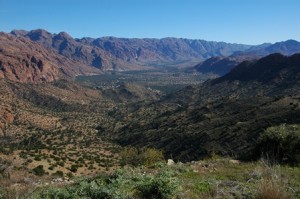 The next day saw us following another piste from Tafraoute down to Foum El Hisn. This time the gravel had been maintained, but the majority of the piste could easily accommodate a convoy of camping cars. At least until the village of Igmir, where the piste narrowed to LandCruiser width only, with the need for some extra ground clearance. We wound our way along an old riverbed, snaking between the small houses.  Already, though, the signs of development are everywhere – perhaps the sound of tar being laid?

Towards nightfall, we again asked the locals for a recommended spot to spend the night.  We were pointed in the direction of Icht where we found a beautiful campsite run by a Frenchman, Phillipe.  A well earned shower and sundowners were on order.

In any case, a fantastic experience and a highly recommended trip.

This entry was posted in Morocco. Bookmark the permalink.