Our days in Etosha were drawing to a close. We still had one full day before we started the extended journey back to Windhoek to catch our flight. And it turned out to be a very special day.

The morning dawned glorious and golden – and rather chilly – as it had most days. Our plan for the day, aside from visiting the numerous waterholes, included a detour to a lookout point located about a kilometre onto the pan itself. We set our route accordingly.

It is difficult to describe the view, and capturing it on a camera was virtually impossible. The only distinction between the road and the pan itself was a very low line of poles linked together in places by a stout cable. Otherwise it was just a white expanse devoid of vegetation for as far as the eye could see. It felt like being adrift on a vast lake, peering back at the land – only there was no water. It was a very eerie feeling and absolutely spectacular. 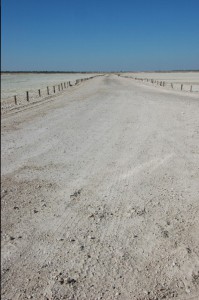 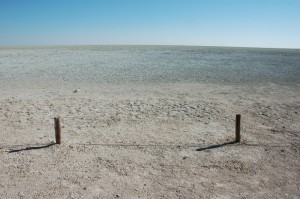 A little further on we stopped at a reststop for a leg stretch and comfort break. Here we were allowed to leave the vehicle and walk down to the edge of the pan. Photos do not do justice to the vastness. We soaked in the atmosphere.

Again our day was filled with many birds and animals – some of the usual suspects as we called them: black-faced impala, zebra, kudu, springbok, steenbok, giraffe. Still special for us to see these animals in the wild. 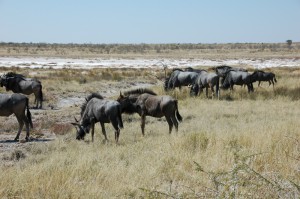 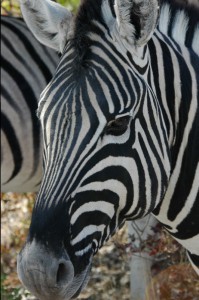 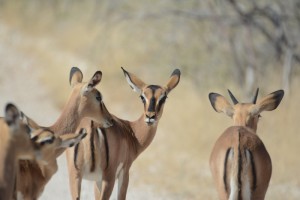 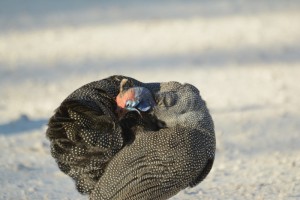 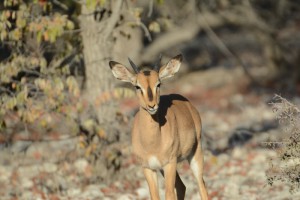 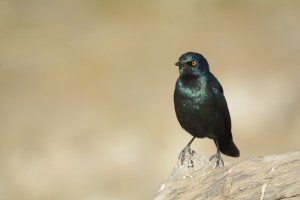 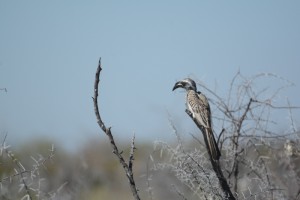 Our route for the day took us back to Kalkheuwel, the waterhole where previously (in 2013) we had seen six lion and two herds of elephant (60 in total). It was much later in the day this time, and we parked up under the shade of the lone tree covering the parking area and had a snooze. About an hour or so later, the sound of other vehicles arriving woke us.

What I particularly love about revisiting national parks is seeing the changes from one visit to another. There were many changes here. Since our last visit in 2013, a fire had swept through parts of the park, and so Kalkheuwel was more open than last time. Many trees had lost lower branches, and some trees were gone altogether. One waterhole on the one side of the parking area had dried up significantly, and another one had materialised on the far side of the parking lot. But we did see the same intelligent elephants as last time – the cunning creatures who prefer to drink straight from the water pump rather than from the waterhole!! There were numerous kudu who came down to drink and a couple of giraffe. Still a magical place. 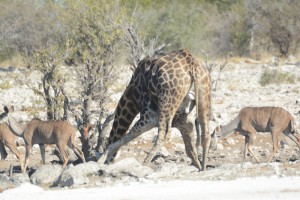 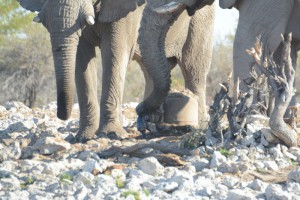 Our last beautiful surprise came in the final kilometres for the day, as we neared our campsite for the night at Namutoni. We saw a group of about six vehicles parked on the side of the road – more vehicles than we had seen the entire day! Something special was lurking within sight of the road so we joined drove up quietly and joined the queue.

It was my favourite. My all time favourite and ever so rare to see in Etosha due to their low numbers.

A female cheetah with two slightly older cubs were lying in the shade of the trees next to the road. There was a herd of springbok just too far away, and it was still just too hot, but the mother was making movements to indicate she wanted to hunt. She moved stealthily from tree to tree. We watched her as she watched the herd. Her offspring waited patiently. Eventually common sense prevailed and she gathered up her cubs and the group moved quietly into a cooler, denser clump of trees further away from the road out of sight of tourists. We returned a little later when the day had cooled. Using binoculars we found the trio still resting in the shade. No kill in site. 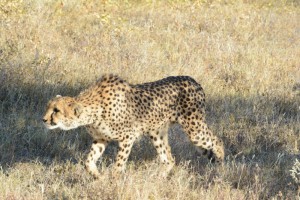 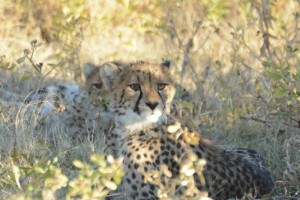 What a truly magical way to end our time in Etosha. Seeing cheetah in the wild.