The Namib-Naukluft Park is a park of contrasts; in the Namib part there is sand and koppies (small stone hills); in the Naukluft part there is sand and mountains (large stone hills). The main difference between the two (apart from the size of the hills) is the sandy area in between the hills. Namib is a desert landscape, it has lots of sand in wide open plains. Naukluft is a mountain landscape, and the sand is what makes it possible to travel between the mountains. They are equally beautiful landscapes. 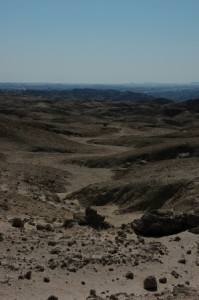 We arrived from Henties Bay to Swakopmund on a very foggy day. After successfully navigating our way to the Namibia Wildlife Resorts (NWR) parks office, we knocked on the door to the lady who controls the permits for the park. She was very friendly, very helpful, and very efficient, so it only took us 15min to buy our permits and our camping, grab a map and some information about the park, and head out the door.

African GirlChild quickly discovered that there was a trail outlined on the back of the sheet with the park rules. Without telling me too much she proclaimed “we are going to follow the beacons” – which we then did, all the way to the end. The trail is the Welwitchia Trail, so called due to the native plant that grows in the area, of which a magnificent specimen is found at the end of the trail. It is estimated that this particular plant is about 1,500 years old. With only 20mm of rain per year average, it is a hardy plant, and unique in that it only has two leaves. Each beacon on the trail has a number, and there is a small paragraph of information associated with each beacon. Most informative, and it makes for more interesting driving. Brownie point to NWR! 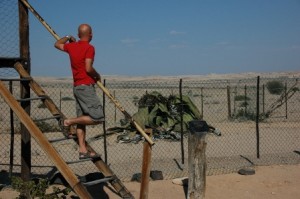 Our time in Swakopmund had also included filling fuel and buying provisions, so we didn’t want to go too far that day. We had set our sights on the Tinkas campsite, as we had heard from multiple sources that this was the best of the campsites in the Namib part. The trail to the campsite is covered by permit, so there is very little traffic. We didn’t meet another car on the way in, and there were no other cars at the Tinkas site we laid our eyes on. This was fortunate as there was only that one site there. Very primitive, with only a longdrop toilet and no shower.  Magic.  We found the trail head for the next day’s hike, and settled in for the night. It was a very quiet night with a big, almost full, moon. 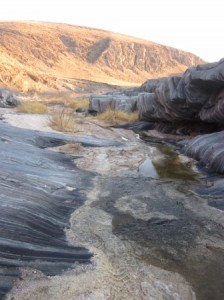 The Tinkas Nature Trail follows the river beds in the area. We packed water, peanut butter sandwiches, fruit, and Roy’s Bites (sticks of dried sausage), and set off. At first the going was a bit tough, but sand soon gave way to more rocky terrain, easing the effort. There were two things we noticed as we walked; one was the number of animal tracks in the river bed. There were clear spoor from zebra and gemsbok/oryx, and from other antelopes – most likely springbok and klipspringer. We could also see spoor from carnivores (hyena and probably jackal), and from birds. The other thing we noticed was the variation in rocks; there were grey rocks, and stripy rocks, and red rocks, and black rocks (as you can see my knowledge of coloured rocks is quite good…). It was fascinating. We stopped for a quick bite in the shade of a rock full of indents where a pebble had been caught in the flow of water a long time ago. We clambered down and up barricades made up of boulders, only guided by the gemsbok hoof prints that indicated the trail direction. We watched the birds swoop in and out of their hide-outs in cracks in the rocks. And we watched how the dry river bed suddenly carried water when the change in rock meant that the water could only flow over the rock and not under the sand. The trail took us 4 hours to complete, and we covered 11km. Highly recommended. 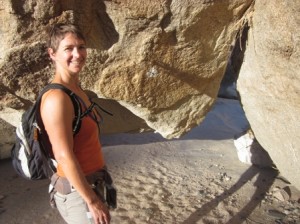 From Tinkas we set off towards Soussusvlei. Our permit was still valid, so we cut across the park on some superb gravel roads. On the way south we also passed the Groot Tinkas campsite which did not look appealing at all (we made the right decision to stop at Middle Tinkas), and we saw a very nice selection of animals roaming on the wide open sandy plains (mountain zebra, gemsbok, steenbok, klipspringer, jackal, duiker). The roads going through the park were in very good condition (better than some of the national roads), so we made really good time and reached Soussus Oasis just in time for a sundowner. 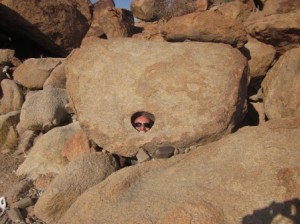 After a few days in Soussusvlei (see separate post) we headed towards Naukluft. We had heard that both the Waterkloef (17km) and Olive (10km) trails are very good, so we set our eyes on the Olive Trail.

The trail starts not too far from the Naukluft park office and campsite, which is located 10km away from the gravel road. It is an easy drive. We were again met by friendly staff who quickly sorted our permit and camping out. Early the next morning we packed up and headed to the start of the trail. The first side of the triangle follows the side up the mountain to reach the plateau. For the second side of the triangle it turns the corner and heads down the mountain using the river beds in steep gorges. It is a super walk in the ravine where the river flows, again with boulders to get passed. At the end of this section there is a pool in a very narrow part of the ravine, and it can only be traversed using hanging chains on either side of the pool. A good challenge for nerves and footing: African GirlChild had the nerves; Viking Explorer the good footing. The last section follows what used to be the Naukluft 4×4 trail (sections of this trail was washed away about 3 years back so no longer in use) and makes for a nice and easy walk back to the parking lot. It took us about 4.5 hours to cover the 10km, including lots of stops for photos and snacks. In addition, we saw klipspringer, mountain zebra, kudu, dassie, and a selection of birds.

And so, after a quick stop back at the office to let them know we were safely back down we exited the park. We enjoyed both our stay and our walk.