The quiet wadi we thought we had found was surprisingly busy. Local cars shuttled between the main road and the settlement near us – we waved good naturedly as the cars flowed in either direction. In the the morning, the vehicles started up again, but this time it included westerners too. A group of 5 cars with numerous occupants passed by, presumably on their way to hike “Stairway to Heaven”. One car had become stranded – a series 4 LandCruiser. Viking Explorer has been lusting after one for years, and so had a good inspection … one day! 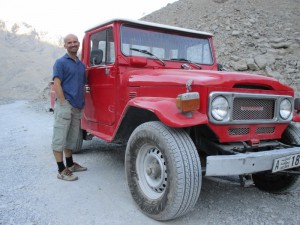 We packed up and returned to the main road. Our plan was to see how far we could make it into Wadi Bih following route no. 5 in our Off-Road UAE book. The wadi extends west-east from UAE into the southern part of Musandam (Oman). The border post is closed, but just for good measure we drove all the way to check. No luck. 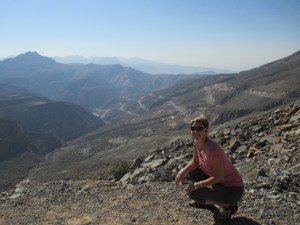 Instead, we climbed up a newly tarred road (new since the book was published in 2011) to see if we could find the resort 30km up the mountain which had been under construction when the book was published. The road wound and twisted its way up the mountainside. This was no natural track being followed – we could see where in places the mountainside had been blasted to make way for the cars. Higher and higher we climbed, the scenery ever so stunning. We noticed toilets and large viewpoints had been erected at regular intervals up the mountain. We stopped at one – the toilets were surprisingly clean, but the large viewpoint area was strewn with litter, despite large rubbish bins being available. So sad to see. 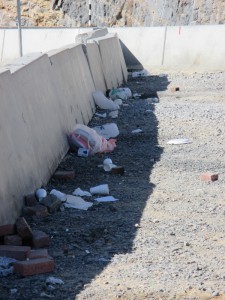 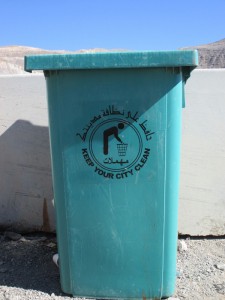 When we reached the top of the tarred road, the final viewpoint was packed with people camping. A few tents were set up and lots of people sitting around eating, picnicing. Not a western face in sight. We were astounded. The tarred road turned into a dirt track, and we continued further up the mountain in search of the resort, although we were becoming skeptical as to its state of completion. Again, as we ventured further, there were more people camping on whatever little piece of flat ground they could find. Finally at the top, and less than a kilometer from another closed border with Oman, we found the probably site of the resort – although the only signs of life were a few seemingly abandoned earthmoving equipment, and a few more campers. No construction yet started on any resort.

It was noon by the time we finished our lunch with a view over the valley. The stream of traffic up the hillside was increasing in volume, and the number of picnics growing. As we returned down the mountain, every viewpiont we passed was filled with people having picnics, and cars were parked in long lines on the hard shoulder. We navigated our way back down the mountain and though the villages back to the main road by following the line of cars heading in the opposite direction.

About half an hour away were Khatta Hot Springs. While in the general vicinity we thought it was worth investigating. The building looked modern, and after paying our entry fee at reception, segregation was implemented. Men and women passed through different doors and had their own facilities.

The last time we were in a hot spring was in Zambia, when we visited Kapiysha Hot Springs. Those springs were so closely maintained in their natural environment, with only a low wall creating a dam for the spring water. This time, modern brick building was erected, and the spring water was housed in a large octagonal swimming pool covered with shade cloth, the bottom of which was the only nod to nature – still covered in pebbles. No photographs allowed. There were sun loungers for those who wanted to catch some rays. There were a few other ladies present – another westerner, 2 arab ladies and a handful of Indian ladies. Much (slightly heated) discussion ensued as the Indian ladies wanted to enter the water fully clothed in their dresses while the Arab ladies were firmly telling them they need to put on swimming costumes as clothing was not allowed in the spring. I took my cue to depart. 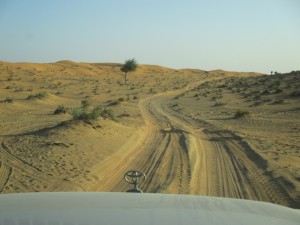 As the afternoon wore on, we planned another route from the off-road book. From previous trips, and now this trip, we were beginning to realise that the accuracy was diminishing, even though the book was printed 2 years previously. The very isolated routes weren’t really, and we realised how had it is in this country to truly escape other people. Route 2 looked to be a fun way of seeing some interesting scenery, and we set off through the smaller villages until we reached the dirt tracks through farmland. In this area, growing turf is the key product, and the stark contrast between irrigated green grass and red sand of the desert was surprising. After the farmlands, we passed underneath powerlines for a stretch of desert before the well worn tracks we were following veered into the desert. 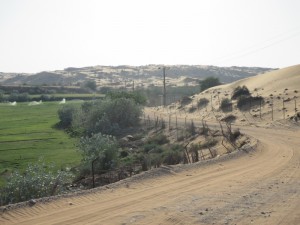 It was so pretty. The red sand, the relatively hard packed sand track and us. There were a few trees and lots of little low bushes. The sun was dipping towards the horizon. We passed some camel herders along the way, their camels with babies grazing peacefully. They sat alongside their little 4×4 in the shade, and gave us a friendly wave as we passed. We have found people to be really friendly in UAE. 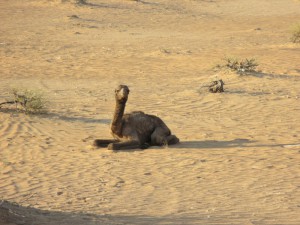 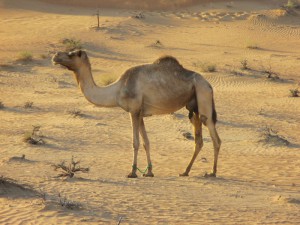 We found a charming spot to camp for the night. With lots of bushes on the ground, it seemed there were fewer people engaging in “dune bashing” activities. We have heard stories of people setting up camp only to be disturbed in the night by groups of people in their 4x4s “bashing” around over the dunes into their camp! We wanted to avoid that.

We weren’t that far from the track, and were again reminded how well used it was – a few cars passed in either direction, waving to us as we set up camp. 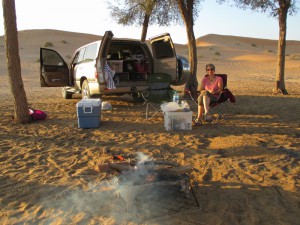 We pretended we were completely alone.

… Aside from the local music we heard from over the dune

… and the little settlement we spotted when we climbed a dune to watch the sun set. 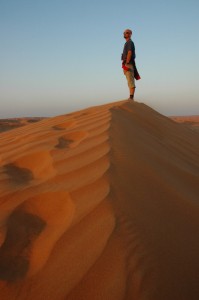 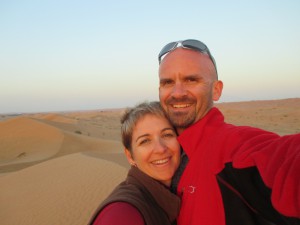