Posted on October 10, 2013 by African GirlChild

We spotted this trail in one of the South African 4×4 magazines, and it looked like a very good option to experience the Kgalagadi Transfrontier Park up close and personal. The booking was soon made with the park directly, and we were very excited as we pulled up in front of the petrol station at Twee Rivieren to meet our guide and the other vehicles. 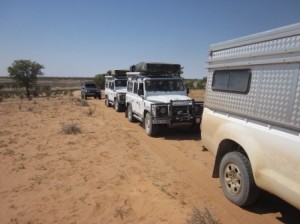 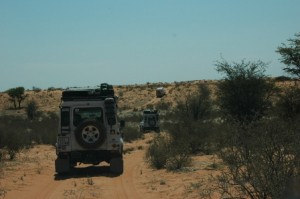 After introductions and a short briefing from our guide, we left Twee Rivieren just before nine in the morning. The drive to the trail head took us about an hour, and we stopped twice for lion and once for a pale-chanting goshawk eating a snake. Off to a good start. 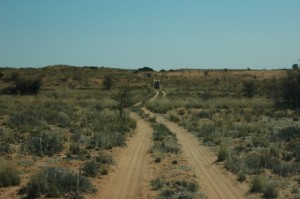 The trail is beautiful as it winds its way along and over the sand dunes between the two river beds. It forms a two-spoor ribbon of red sand cutting through the grass and shrub clinging to the sand dunes. As the trail crests a dune the landscape opens up, providing sweeping vistas of rolling sand dunes as far as the eye can see, and at the taller dunes subtle changes in vegetation and sand mineral contents can be spotted. In the troughs the grass turns greener, posing a striking contrast to the red sand. 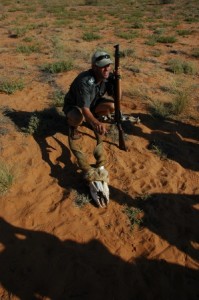 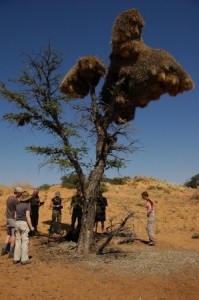 There is not much shade here. Hence, we did not see much life. There was the regular, and by now common, faces to be seen; gemsbok, the occasional stray springbok, red hartebeest, and a fleeting glimpse of a steenbok, but most of the two and four legged creatures had found a shady spot to spend the day. Easily understood when the temperature crept just above 40C during the day. As we were travelling north we had the sun in front of us the whole day.

The bush camps are basic and functional, and the two northernmost provide a bit of shade from the beating sun. They are all unfenced, giving free access for wildlife to investigate. There is a certain magic to sitting around the campfire at night, not quite knowing what is watching you from just outside the ring of light provided by the flames. And it is always interesting to have a close look at the ground around the vehicle in the morning to see who came to visit during the night. 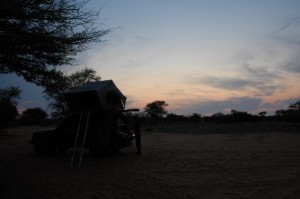 Our first full day started at eight, only because we were all ready to go by then. This turned out to be the hottest day, and some of us were getting very grumpy from starting this late, missing out on at least an hour of cooler driving if starting earlier. We, and some of our fellow travellers, made a strong case of starting earlier to avoid the heat. This was accepted by the guide, and only grudgingly accepted by the last vehicle in the group. Hence, the two last days were better, and not as hot, as we started at seven in the morning. 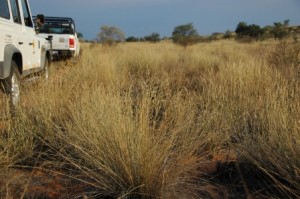 Our guide provided us with handheld radios so we could keep in touch on the trail. They sort of worked. Not all vehicles could hear all messages being sent from the guide, nor could the guide hear all communication from the vehicles at the back. Sadly, the radios were also a bit under-utilized, in that very little information came from the guide about what we were passing in regards to wildlife and vegetation. 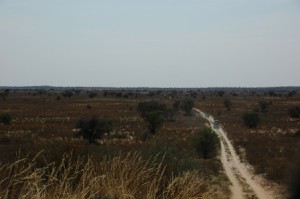 The trail is a good contrast to remaining on the tourist roads, and we were fortunate to be a small group of four vehicles and eight people in total. For us, the four day trail turned out to be one day too many. There is not enough variation to keep interest up for four days, especially in the summer months when the heat is on. Although spectacular, the landscape becomes monotonous in the end, and all the sand dunes are starting to look the same. Occasionally there is one dune that requires a bit more attention, but the monotony quickly creeps back in. The lack of game – and of birds – also contributed to the thought that a three day trail might be a more suitable offering.

The Nossob 4×4 Eco Trail is a guided four day trail that runs off the beaten track in the Kgalagadi Transfrontier Park. It follows a two-spoor jeep track, more or less paralleling the main road along the Nossob river bed. The one trail head is about 40km north of Twee Rivieren, the other is about 60km north of Nossob. On odd months it runs in one direction, on even months it runs in the other direction. Our trail went south to north. We recommend choosing an odd month during summer so as to travel southwards.