After many months of dithering about what to do with the vehicle, it seemed that returning the vehicle to the UK was the best alternative. As Viking Explorer had already returned to corporate life, the task was left to me to arrange.

I was quite surprised at the reaction of family when I announced that I would be driving the vehicle from Johannesburg to Cape Town on my own. People expressed much concern for my safety, concern about me driving such a long way on my own. Funny. You wouldn’t have thought that we had just spent 13 months driving through Africa. In any case, I remained undeterred. The easiest place to ship the vehicle was from was Cape Town as I have the support of family, which eases the process considerably.

But first, I needed to do yet another repack of the vehicle. That which will be used for future trips needed to stay in the vehicle, while souvenirs and other personal items should stay out. I wanted to avoid any nasty surprises from leftover food or lotions, potions and gels when we opened the vehicle again. I was horrified by how much we had squeezed into the car. It took me 2 full days to unpack, sort, and repack the vehicle.

Early in the morning, just as the sun was rising, I set off from Johannesburg. The directions were pretty easy: join the N1 south and head towards Cape Town. For about 1,500km. I planned a midway stop as I didn’t fancy a single day trip.

It was the first time I had driven the vehicle for such a long way. Somehow on the trip we settled into a routine where Viking Explorer did the majority of the driving, while I took care of a lot of cooking and washing up. Like most routines, it developed without us realising it, and persisted for months. But now, it was me behind the wheel.

At first, I was so conscious of the size of the vehicle. It felt like driving a tank. But soon, I settled into the comfortable seat and easy steering and had a chance to watch the stunning scenery I passed through. Like I have said many times before, South Africa is such a beautiful country.

With it being midweek, the roads were quiet. There majority of traffic was large trucks transporting goods across the country. Very few small cars. The only annoyance was the roadworks I encountered in the last kilometres before my nightstop. Known locally as “Stop Go”s, half the road is closed while the other half is used alternately.

My stop for the night was at Bun Clody Guest House in Hanover, exactly halfway between Johannesburg and Cape Town. It had taken me 9 hours to reach there, and I was feeling hot and tired, and stiff in my neck and shoulders. But the hosts made me feel right at home, and I was incredibly grateful that they provided both dinner and breakfast. I didn’t have the energy to wander too far to find food. 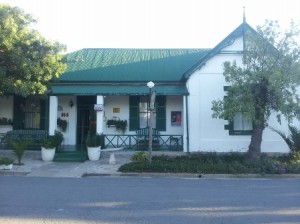 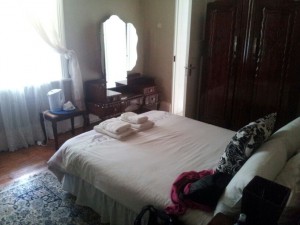 There were lots of interesting people staying there too. A group of contractors were working on a solar installation not far away. The youngsters were only a few years out of high school, and I really felt quite old looking at their young faces. There was a more Afrikaans culture – with respect for elders still intact and chivalry alive and kicking. The youngsters used the old tradition of calling their supervisor “Oom” (uncle), and even called me “Tannie” (aunt) as they also did the hosts!  The supervisor, Leon, invited me to join them all for a game or two of pool at a nearby local bar. Not only was I not allowed to walk around the corner to the bar (it was that close by) but he kindly opened the truck door for me while the youngsters jumped into the back! Mfundiso, a sales rep for a pharmaceutical firm who was also staying at the guest house, joined in after his long day on the road. It was a fun evening in a small Karoo town, with old style hospitality.