After chilly temperatures in Nyika, we were starting to feel like we were enduring another UK summer, rather than savouring a Malawian winter.  Also, after 2 weeks in Malawi, we still hadn’t reached the shores of Lake Malawi – criminal!  So, after stopping in at Eva Demaya clinic for Viking Explorer, and overnighting in Mzuzu again, we could finally make our way to Nkhata Bay – and meet up with Tom and Jemina of Op Den Tandem (www.opdentandem.net) again.

We stocked up on a few groceries in Mzuzu, and filled fuel, before we proceeded the 50km down to Nkhata Bay.

The road passes through rolling hills down to the lakeshore – lovely lush green vegetation on either side.  We had yet another police stop – but they are friendly, and most times we are waved through without checking any paperwork.

Nkhata Bay is one of the more touristy places in Malawi, with a wide range of accommodations to choose from.  There seem to be lots of activities on the lake – even a diving school!  We bumped into a large UK truck – Grey Nomads making their way through Africa.  It has been a long time since we have seen such a large truck; in this corner of the world the Toyota Hilux is King.  There were also lots of curio stalls, local restaurants, and produce stalls.  It is certainly adapting to the steady flow of visitors.

We met Tom and Jemina at Njaya – the last campsite on the road.   It was so lovely to see them again.  They have been travelling a lot slower than normal since they are also contending with the Malawi Bug.  We enjoyed a lazy afternoon lounging on the sun deck, chatting.  Then, we shared another dinner together.  They are heading north to Tanzania, while we are heading south to Cape Maclear, so this is the last time we’ll enjoy each other’s company for a while.  We are hoping to meet up again in Rwanda or Uganda.

Next morning after fond farewells, we ventured a further few kilometres down the lakeshore to the Chintheche Strip.  Along the way, we passed through rubber tree plantations.  Along the road sides were vendors trying to sell their bouncing balls made of rubber bands. 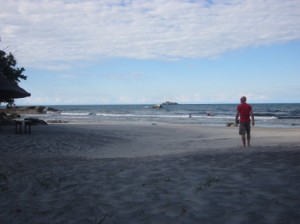 Chintheche is reported to be less touristy and consequently a bit quieter, so we thought we’d explore.  It took a little while to conclude our search: we eventually settled on Makuzi Beach Lodge – a relaxing campsite under the trees with a gorgeous view of the lake.

As always, there were other travellers passing through.  We met 2 South African couples (Anna & Andre, Pearl  & Hans) who are on their way back to Cape Town after going as far north as Tanzania.  There was also a bit South African self drive tour group of 8 vehicles plus guide who are on a whirlwind 16 day tour of Zambia and Malawi.  There was a further South African couple (Craig and Karin) who run their own safari tour company in Natal, South Africa.  Lastly, there was a Dutch couple on motorbikes who have been touring Africa on and off for almost 2 years. 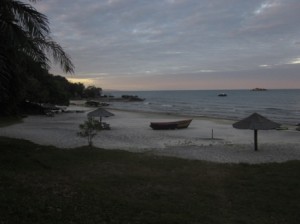 Our planned one night quickly turned into three – the magic of taking things as they come!  Viking Explorer was under strict instruction to get well, and so we basked in the sun on the beach, read in the shade of the trees, played scrabble in the bar, chatted to fellow travellers and generally soaked up the atmosphere of being on the lake.