On the road again

There are three types of scenery in the Gulf States: desert sands, mountains, and beaches. Our preference is mountains. For us there is no appeal in ‘dune bashing’ – going up and down sand dunes. It seems a bit repetitive. Beaches are good as destinations – a place to have a cold drink at the end of a trip through … you got it – mountains.

Our aim while here in Abu Dhabi is to explore as much of the mountains as we can. There are some mountains here in the UAE and there are more in Oman. Fortunately for us we have found travel companions who also enjoy exploring mountains and who are happy to venture a bit off road. 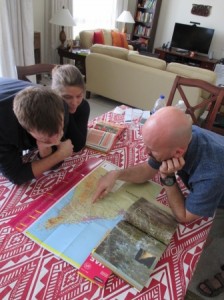 And so we found ourselves hunched over a table with maps and guide books spread out, looking for the smallest roads and the best view points. I must say here that the maps of the UAE and Oman are not great. They lack a bit of detail. While travelling in Africa we were also spoilt by the detail of our electronic map, it is amazing how quickly you get used to relying on what other travellers have seen and noted. We didn’t want to go too far away from Abu Dhabi as we only had two days. Nor did we plan on going into Oman this trip as we did not want to deal with border crossings. We agreed on a route towards the town of Hatta, and to take things on the fly as the day progressed. 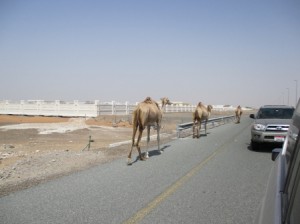 The following weekend we spent most of our time acquiring camping items and some of the food basics for the trip. We needed a table, a cooler box, some tools, a cooker, and some equipment for the kitchen. Towards the end of the week we visited the South African butcher to stock up on the meat for the braai we had planned. Our friends had promised to take care of the vegetables and the cold drinks for the evening around the camp fire.

We set off early on a Friday morning (weekend here in the UAE is Friday and Saturday) and drove out on quiet roads in direction of Oman and Hatta. A quick fuel stop later we turned off from the main road and started our exploration of the mountains just on the border between UAE and Oman. 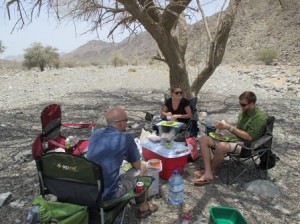 It was relaxing being on the road again, surprisingly easy to get back into the travelling mode we had while in Africa. We had managed to get hold of an electronic map that fitted our GPS which made navigation somewhat easier. Up in the mountains, though, it didn’t make much difference. It was driving on instinct, trying to find the track that looked most used. Soon we found a track that looked promising – it looked well used and it was pointing in the right direction. We passed some fences, we passed some farms, and we drove past herds of camel and goats and some bee hives. And then we arrived at a gate. It was open, but it was clear that we were about to enter private land. I stopped the car, disembarked, and approached the farmer who came towards me with a big grin on his face. Formalities over – no English here – I pointed in the direction of Hatta and asked “Hatta?”. He shook his head and declared firmly “khalas” – finished! This was as far as we could go. The only way to get to Hatta was back from whence we had come and to go the long way around the mountain. 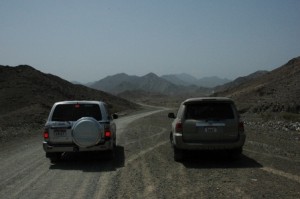 We could now see the scenery from the other direction, and it gave us a good excuse to stop for lunch. We found a tree that had a little shade, and unpacked our camping chairs. Without a thermometer, it is difficult to know the exact temperature, but it certainly felt like well into the 40s, and we were grateful for a small breeze of warm air. After an hour or so relaxing, chatting, eating, we continued on our exploration. 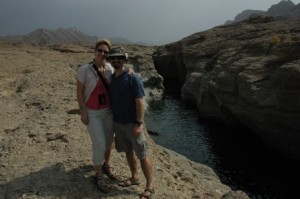 Unfortunately for us explorers, the roads in the UAE are slowly being tarred. The guide book we used from 2012 is already out of date. It talks about steep gravel hills and technical sections on a stretch of track that is now two tarred lanes in each direction. It will get more and more difficult to explore in the future. 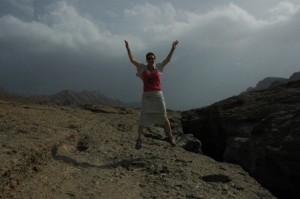 In Hatta, which we reached in no time due to the above mentioned tarring, we decided to head towards the Hatta Pools. In Oman. We had bought car insurance for Oman and had agreed to bring our passports for this exact scenario. At the border there was a lone guard. He checked our passports and waved us on. No stamps, no insurance check, no entry formalities. But, we would only be able to leave Oman out the same way. 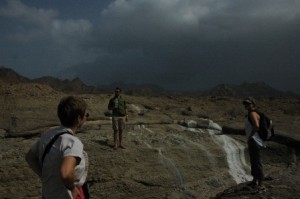 Hatta Pools were in full use when we arrived. Although the day was hot, the pools didn’t look too inviting to me, but African GirlChild would have swum if there hadn’t been so many men around. We wandered around a bit, dipped our toes, and decided to continue towards the planned camp site for the night. At this point it looked like the heavens were about to open and give us an afternoon shower. 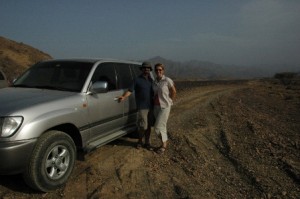 After some searching we found the track that we hoped would eventually lead us to our camping spot. We had to do some scouting of the track and some good 4×4-ing to get there, but it was worth it. Our chosen site was surrounded by small hills, and was far enough away from civilization for it to be almost completely quiet. We quickly started the fire, put the chairs out, and began preparing the braai feast. It was super to again be able to sit at sunset, watching the fire, enjoying a sundowner and relaxing after a long day of exploring and experiencing. 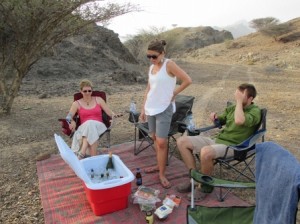 The temperature just didn’t drop. While travelling in Africa, we welcomed the cool evenings after scorching days, but that was not going to happen here. Even when we retired to bed, it still felt well above 30s, and the small breeze seemed to die down completely.  After a hot night with less sleep than desirable we put the kettle on and dug the rusks out. Fortunately the sun had hidden behind some clouds early in the morning, but just as we had finished breakfast it came out full force. Hot turned hotter, so we packed up quickly and set off towards the coast, grateful for airconditioning in the vehicle. 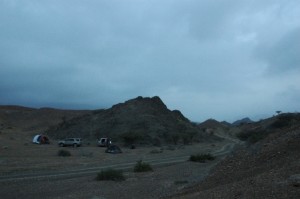 The road down to Kalba and Fujairah could have been from the French Alps – steep up and down, and cresting through a tunnel. At Kalba we turned left up the coast, and it was along this stretch of coast I saw the most wonderful – but sad – sight: 25 (yes I counted) Series-4 LandCruisers on the beach pulling fishing nets out of the water. Wonderful because I love these little cars; sad because they are all beyond restoration due to a serious attack of rust from the salty water. In Fujairah we stopped on the beach for an early lunch before turning back towards Abu Dhabi. 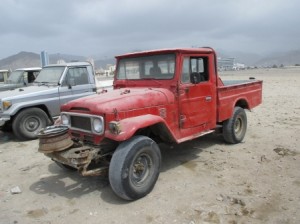 Several of our colleagues remarked that it would be too hot for us to go camping at this time of year. And they all had a point. Had it not been for the clouds they would have been right. It was borderline at the campsite – any hotter and it would have been too hot. But it wasn’t, so we ended up having a most enjoyable first camping expedition. I am really looking forward to cooler weather and more exploring of these fantastic mountains. 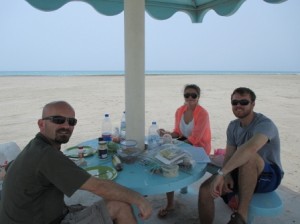 1 Response to On the road again