Posted on January 17, 2013 by African GirlChild 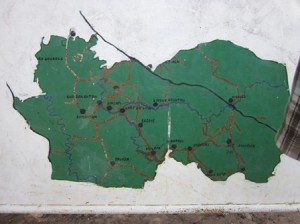 It was Blaise, our mandatory Senegalese guide for Nikolo-Koba, that initiated the conversation; The dilapidated state of the Simenti Hotel is due to it being run for the last 10 years by a Senegalese. Changes are about, though, as a new white manager has been appointed…

The Nikolo-Koba National Park is the biggest in West Africa, measuring about 1million hectares. It has a population of about 180 lions, leopard, hyena, buffalo, hippo, crocodiles, and various other mammals and reptiles. And birds. The park also has a network of roads, an airstrip, several lookout towers, a few Campements with small huts and space for camping, and the Simenti Hotel. Simenti was build and is owned by the Government, but run privately on a lease contract. It is evident that this situation causes a huge challenge in how to run the hotel profitably under the management of the park (or lack thereof). 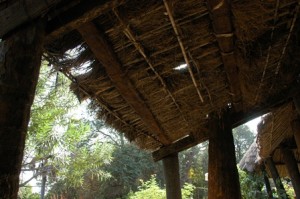 We entered the park at noon, and were immediately made aware of the somewhat peculiar situation that the park entry and the guide are separate. Park entry is based on 24hrs, while the guide, which has nothing to do with the formal park management, is per calendar day. For us, as we wanted to stay overnight, it meant buying access for 48hrs to marry access up with the two days of guiding we also needed.

The roads are bad, and in places we could hardly fit Brodie between the tall grass on the one side and the trees on the other. It is 35km from the gate to Simenti, a distance it took us 1hr 45min to cover. The bush is dense, limiting the view significantly. And we were there in the dry season! I cannot even imagine what it is like when it is the wet season. On the way in we spotted 3 antelope, and at the campsite I spotted a Honey Badger just as we were about to go to bed. The only other viewing we had was a small herd of Waterbuck at the Lac de Simenti. Very disappointing for a park of this size. 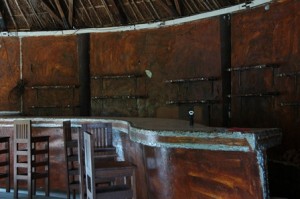 At Simenti we stopped to avoid the worst of the afternoon heat, and to enjoy the view from the deck – and to experience the first disappointment: we had to search for the bar-keeper so that we could buy a cold drink. The second disappointment followed straight after: we noticed how neglected the hotel looked – no handles on the toilet doors, cracks, holes in the roof, leaking pipes… Blaise told us that Simenti once (under previous white management) had a fully working airstrip, with four 4x4s to ferry clients and to do the safari rounds . Under the following period of Senegalese management this deteriorated, and at one point there was only one working lorry left to undertake all transportation needs. Now, with a new white manager, Blaise said he himself had already seen a change in the running of Simenti. 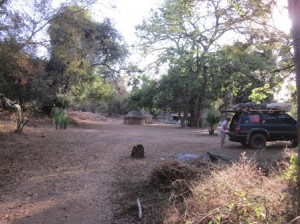 From Simenti we went to Camp de Lion, where we spent the night. It is a lovely little campement with spaces for vehicles and tents. Facilities are basic, but they look clean. There is another campement not far from Simenti, Gue Damantan, which also has small huts, but less dedicated space for camping. It is also possible to camp at Simenti, but for us it would probably the last choice of place to stay. At Camp de Lion we again ran into a problem that seems to be all over Senegal: change for payment. There was no money at the camp, so they could not give me back change. We ended up having to buy extra drinks so that they didn’t owe us money… not how it should be.

The next day we tried to reach the Grand Mirador but the road was impassable. I could have pushed Brodie through, but there was no point as it would have been very hot and very slow going. We headed back to a hide at Simenti, and after sitting out the hottest part of the day we exited the park.

Nikolo-Koba has huge potential, and it could become a park on par with many of those in Southern Africa or East Africa – but investment and work is needed. When we arrived back at Wassadou we met people who were thinking about going into the park and that asked if we would recommend it. It was very hard to not outright say no, but to try to give a more balanced account of our stay. Two days for us was enough.