Resting in the Rwenzori Mountains

Posted on September 7, 2013 by African GirlChild

What a magical place we managed to find.

On the way south from our walk around the Bigodi Wetland Centre, we decided to stop in at the Rwenzori mountains. Tracks4Africa shows that there are a few options for camping just outside the park gate, so we decided to head up the road to stay and maybe go for a walk.

The turn-off from the tar started with a nice gravel road that slowly became narrower and narrower, at the end turning from a road to a track, and then to a very rocky two-spoor jeep track – and all the way we were following the signs for the Equator Snow Lodge… not every day that a lodge has a road this bad leading up to it!

After about 15km we arrived at the outskirts of one of the village Rubonai where the first campsite is – the Ruboni Community Camp. Enok was at the gate greeting us, telling us that this was the best site to camp of the two belonging to the Ruboni community. The site about a kilometre up the mountain is not really suitable for camping (which turned out to be the case). We said we still wanted to see it, and headed up towards the other camping alternatives nearer to the park.

Just before the park gate is the Equator Snow Lodge. Built with support from USAID and land donated by WWF, it is run by GEO Lodges (who also run other high-end lodges in Uganda). We asked at the gate to the lodge if they had camping, and were promptly directed to the manager. What a stunning place! It is completely built using the rounded pebbles and rocks from the river, blending superbly in to the surrounds. The chalets sleep four, have a huge fireplace, and a large deck overlooking the surrounding mountains and the nearby river. At US$118 full board it is a very good offer – if you are not on a one year camping trip that is… 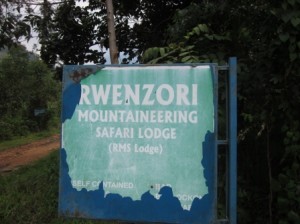 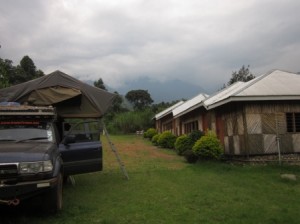 After the tour of the lodge we headed back down to have a look at the other campsite run by the community, before Enok suggested crossing the road to the Rwenzori Mountaineering Safari Lodge where we decided to stay. Ronald the host was super friendly, gave us hot water for a bucket shower, and allowed us to plug in to his hydro-power set-up. The campsite was quiet, which suited us perfectly. Bwambale, the local representative for the Tourist Police, also came to check that we were comfortable, and assured us that we were safe and he would be looking after us.  With only a few kilometres over the mountains to DRC, this was reassuring.

He went above and beyond, though, and while we were resting later in the afternoon, he showed us the rare Three-Horned Chameleon – both male and female – that he had found near his house.

The next morning we decided to have a slow day and not go for a walk. We did, however, catch up on some sleep, do some writing, and some bird watching. 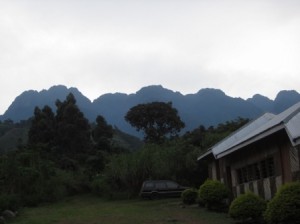 We gazed at the mountains around us – it was so peaceful, serene and allowed us to relax and appreciate the scenery.  In the afternoon, the mountains showed us their fickle nature, and sunshine gave way to torrential rain!

After another quiet night (and waking up to snow on the mountain tops) we were invited to a local breakfast – the traditional matoke (cooking bananas and potatoes in a peanut and tomato sauce), and “tea” of hot milk with local leaves. 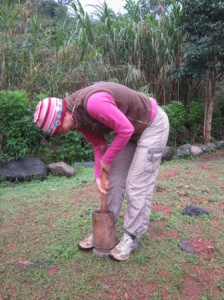 In a gentle way to introduce us to the local culture, African GirlChild was given the peanuts to crush using a stick and wooden “pot” – cooking being the traditional job of the woman of the household.  We sat on the verandah of a rather simple multi-room sleeping quarters, basking in the sun, and enjoying a tasty meal. 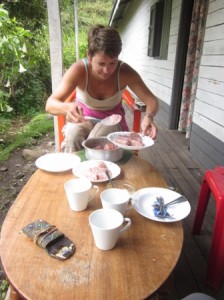 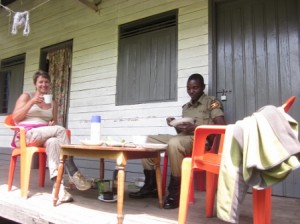 But, we couldn’t stay forever.  Last stop before we left was to have a tour of the micro-hydro electric facility that they have at the lodge.  It was fascinating – something so small providing much needed power. 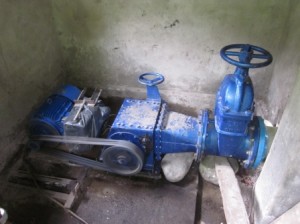 And then, it really was time to head back down the mountain towards Kasese.

For those of you who have followed us since the beginning may remember a post titled “Overawed by kindness” when we were in Morocco. This was a stay along the same lines. The place was simple but nice, the staff and the other visitors very friendly, the Tourist Police representative was superb, and we had a very good stay. We really were overawed again by the kindness of this little community.

The whole community unites in supporting tourism in a way that we haven’t experienced anywhere else.  Not only did Enok help us find a suitable campsite – even if it wasn’t his – but also offered any guiding we were interested in.  One of the ladies from the Equator Snow Lodge was down at our campsite, and came to check if we would like to come up to the lodge to have a meal.  The tourist police also work closely with the community to encourage them not to overcharge the muzungus when they come to the market.  It really is a community effort.