Yes, there are many lakes in Africa – and we have found our way to yet another beautiful stretch of inland water.

We left Tom & Jemina in Nyakanzi and headed towards Bukoba, the last major town in Tanzania before crossing the border into Uganda.  On Tracks4Africa, this road up the west of the lake indicates that an armed escort is required – but we spoke to a policeman in Nyakanazi, who informed us that this is no longer required.  He told us that the police have bush camps in the region and many road checks to patrol the area.  We felt confident. 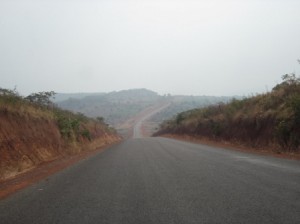 We set off up the most beautiful stretch of tar! 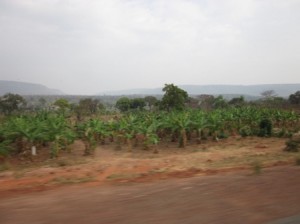 Dusty days rapidly fled our memories as we found ourselves driving through new scenery: green landscapes as far as the eye could see!  Banana trees were everywhere, and we also passed through pine forests.  Viking Explorer felt as though he was back in Norway with the scents of the pine wafting into the window. 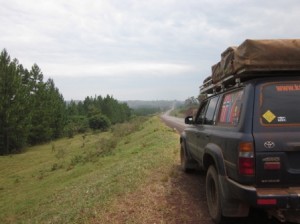 The town of Bukoba is very different from other towns we passed through up the western side of Tanzania: it had more structure and more on offer.  It just felt more developed.  There was only 1 campsite – which was located in the middle of a public beach with a low fence around it!  It was a real goldfish bowl effect … and although we were left well alone, we felt like we were on centre stage. 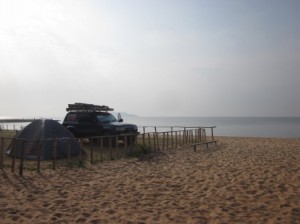 There was a little restaurant and bar nearby, and we decided to have fresh fish for dinner – cooked by someone else 😉  We agreed a time with the cook / waitress / hostess for later in the evening, and 15 minutes before dinner was ready, she came to call us from the campsite!  How about that for service!  She set up a small table on the beach for us, and we watched the water as we enjoyed our meal. 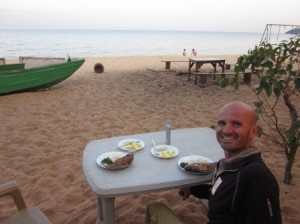 As we were heading to bed, we saw a text from Tom & Jemina.  They had had more wheel problems and were struggling with their Rwanda visas, so had hitched with their tandem to Bukoba in the hopes of being able to find a new wheel.  We didn’t manage to get hold of them – frustratingly – and had no idea where they were staying.  We decided to try again in the morning.

After a quiet night’s sleep listening to the waves lapping on the shore only a few meters from our car, we surfaced.  Our goal was to cross the border, but we wanted to check Tom & Jemina were OK before leaving.  All packed and driving out of the gate they finally answered their phone … they were staying a mere 500m down the beach in a tiny guest house!

2 Responses to Shores of Lake Victoria