Skirting the shores of Lake Malawi

Our southwards exploration of Lake Malawi continued the next morning.  Our ultimate destination was Cape Maclear, located on a peninsular on the southern tip of Lake Malawi.

We stopped briefly in Dwangwa to stock up on provisions at Metro Cash & Carry.  There wasn’t an enormous selection, but we managed to find some of what we needed, then headed into the market for fresh produce.

Our stop for the night was at Nkotakota Pottery – a working pottery company which also had a basic campsite under the blue gums overlooking the beach.  We browsed the store and discovered we could paint our own items which they would them glaze and fire!  Sold!  We planned it for the next morning.  In the meantime, a local choir were practising in the village, so we went to investigate.  It was nothing like a European choir: a group of 10 children of a range of ages were practising to the music playing from a large amplifier and dancing.  We watched a while, and were invited to join in.  I was feeling braver than Viking Explorer (who forgot to take photos!) but had the feeling the locals were laughing politely into their hands. 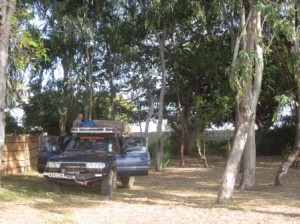 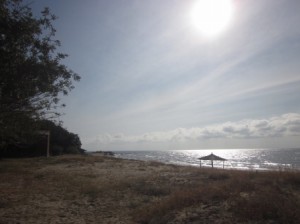 Next morning we enjoyed a quiet hour in the pottery studio and entrusted our precious creations to the resident potter to glaze, fire and send to their other pottery studio in Dedza. 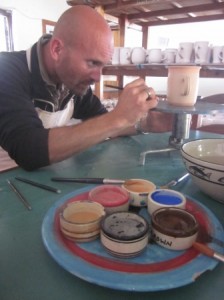 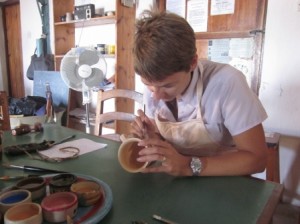 We headed for Senga Bay, Cool Runnings being the recommendation for the evening, owned and run by Sam.  The last few kilometres had 2 beautiful, big curio markets.  We were feeling hot and tired, so decided to postpone a browse until later.  In the meantime, we followed the tracks through Senga Bay village into the beautiful green lawns of Cool Runnings.  We were sharing the campsite with a group of UK school children who were volunteering on some of the Cool Projects that Sam runs in the village. 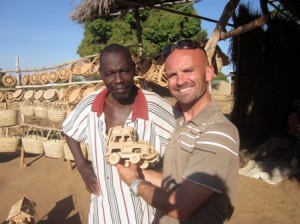 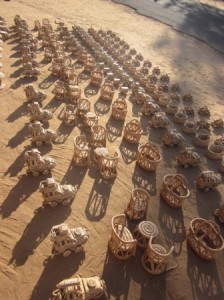 After lunch and an ice cold drink we walked the 1.5km back to the closest curio market.  We have really struggled to find uniquely Malawian souvenirs to remind us of our time spent in Malawi.  While the carvings are very well crafted, one can buy carved animals, salad spoons and masks in most southern African countries.  We finally found a chap with reed weavings – and found a gorgeous 4×4.  OK, it is a Land Rover not a Land Cruiser, but it was very unique and after a short negotiation, Viking Explorer was the proud new owner.  We strolled back through the village, stopping at the local restaurant for a cold drink and to enquire about a dinner menu.  Success on both accounts.

We took a short cut through the village – and again were only treated with warmth and smiles, waves and thumbs up were the greetings shared with the locals.  The children love the novelty of the wazingu (white people) and at one stage we each had about 2 or 3 children hanging onto each hand.  They escorted us through the village before waving us on our way.  That night we returned to the local restaurant for a cheap and cheerful dinner (less than £3 for main course and cokes) while watching a DVD of one of Leon Schuster’s movies!  Classic.

On our way to Monkey Bay we stopped in Salima for meat and chicken.  There is an excellent butchery called Nyama World that had an enormous selection: beef, lamb, chicken, duck … certainly the most impressive we have seen since leaving Lilongwe and we stocked our little freezer to overflowing!  There is also an ice cream den, but we settled on pawpaw and fritas from the vendors outside.