South Luangwa National Park is situated in the south east corner of Zambia between the Great East Road to Malawi and the Great North Road to Tanzania. It has a number of lodges in the park, and a good network of roads to drive. 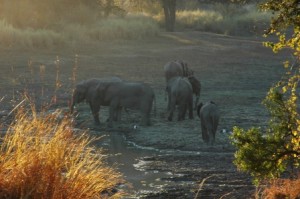 We arrived at the park gate just after six in the morning. The staff were friendly and issued us with our park entry with a big smile. Having had a chat to our travel companion Albert, who had been in the park the previous day, we turned right along the river and tried to find the small roads as close to the river as possible.  Not long after entering the part, we came upon our first siting – a small herd of elephant drinking. 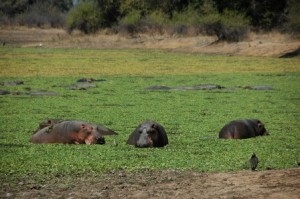 The park has a variety of vegetation – from open grasslands, to riverine forests.  There are also a number of small lagoons and oxbow lakes, which attract different birds to the river banks.  These lagoons are sometimes little oases in themselves, with lush green grass and more trees.  The antelope seem to prefer drinking here than at the river, and animals seemed more abundant.  One of the lagoons was particularly pretty, being completely covered in some sort of pond vegetation which the hippos loved!  We stopped and watched while the hippos stood in the shallow water and munched on the green leaves.  And yes, all those rock-looking bumps are more hippos …

We had a lovely morning, seeing elephant, genet, hippo, crocodile, giraffe, kudu, impala, puku, warthog and zebra. We also spotted a good number of birds  – cranes and storks especially – to add to our list. 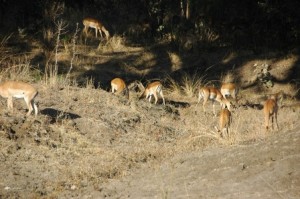 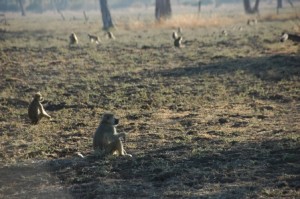 From experience we know spending a full day in the park in the car is tiring, so we headed back to the campsite for lunch. Just before 3pm we headed back into the part., this time turning left to explore the western side of the park. The roads were further from water, and we didn’t see much wildlife, so decided to return to the morning haunts. 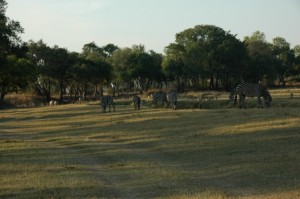 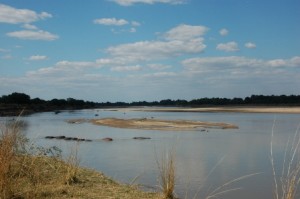 The highlight of the afternoon was a little “faerie glen” that we happened upon.  It couldn’t have looked more out of place!  There was a trickle of water running through a riverbed, but there was obviously water not far from the surface, as the green grass stretched as far as we could see.  Moreso, it looked well manicured, as the animals in the area were keeping it a well-trimmed length.  In a small area, we saw zebra, impala, puku, waterhog and baboons.  We watched quietly for a while, the animals undisturbed by our presence. 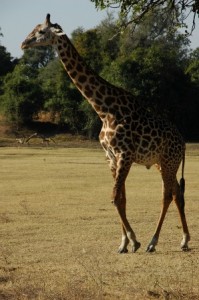 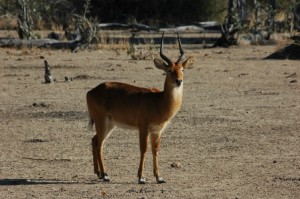 The roads in the park are good, although some of them were a bit overgrown when we were there. It looks like the park is also in the process of upgrading the quality of the gravel on the roads, and also the sign boards at the intersections.

We only stayed close to the river. There are roads that cross the park but at 80km from the Mfuwe gate to the north exit it is not easy to go all the way up and then come back down again in a day. When we asked, the ranger at the gate told us the main road north, the ’05 road, was not passable due to too much erosion from the rivers. Although it is possible to traverse the park to climb the escarpment to reach the Great North Road the only way to do it (when we were there) would be to take another road around the park to the west, adding 70km to the distance.

All in all, the day in the park was great. We added about 25 birds to our list while there, and most of the time we felt like we were the only ones there!