The tour of National Parks continues.  Not a bad itinerary, really, as they are spread around the country and so we have a chance to experience many different habitats and scenery.  Our next Park – Niokolo Koba.

We headed south east from St Louis after filling up with fuel again. Although the distances in Senegal are not large, the condition of the roads renders it difficult to travel much faster than about 50-60km an hour.  Add to that the numerous little villages along the way – all requiring some clever vehicle manoeuvring – and suddenly it’s taken a little longer to reach your destination.

By late afternoon we had reached the town of Touba.  This is now the second largest city in Senegal (after Dakar) and is the holy city of Mouradism, and its founder is buried there.  It also boasts a large market – but with all the traffic, we barely caught a glimpse, much less had a chance to wander through.  However, we did manage to navigate our way to parking near the mosque.

As a digression – there are 2 things that will forever remain in our minds about Touba.  First, it was the dirtiest place we have yet seen in Senegal.  There was rubbish and litter in quantities that boggled the mind.  The locals didn’t even seem to notice or mind – they merely walked over it as they carried on their daily business.  Second, the “money grabbers” were some of the worst we’ve experienced so far.  Everyone wanted to make sure they managed to squeeze us for some money. 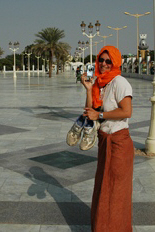 Anyway, we “acquired” a guide to the mosque before we had even turned off the engine, much less climbed out of the vehicle.  Their aim was clear – guide us around quickly while yabbering incessantly, make sure we took lots of photos and then extract money afterwards (for all the photos we’ve taken) – although this last part was strictly “voluntary” and “however much in our heart we felt like paying”.  Indeed. 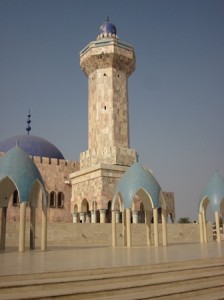 The mosque itself is stunning.  Barefooted we wandered – as slowly as we could manage – around the marble piazza surrounding the mosque.  Despite the heat of the day reaching well into the 30s, the marble was cool underfoot.  It was strangely peaceful, too, despite being in the centre of a city with population 2 million.  As non-Muslims we weren’t allowed in, and were strictly shepherded where we could and couldn’t tread.  As it was Friday afternoon, there was a steady stream of worshippers into and out of the mosque.  The guides (yes, 2) knew all the good places to take photos, particularly of the symmetry of the design.  It was well worth the visit – all factors considered.

As the afternoon headed towards the evening, we needed a place to stay.  We

headed out of Touba and towards a little town called Kael.  Our initial plan was to find a spot to wild camp – but there are so few places where you aren’t spitting distance from a settlement, goatherd, village or cattle driver.  Eventually, we stopped at a Maison Communature.  The gentleman in charge was the Assistant to the President of the regional Community Organisation.  How lovely it was to be greeted with all smiles after our Touba harassment.  He was happy for us to camp outside the Maison – although offered for us to stay inside.  There was a cartographer and his group staying too.

At the end of a long hot day, we appreciated the coolness evening brought, and after dinner, quickly climbed into the tent for a well-earned night’s sleep.

This entry was posted in Senegal. Bookmark the permalink.

4 Responses to Southwards to Touba