So, here we are.  We have finally made it to the south of Spain.  On the whole, we kept dry and warm. 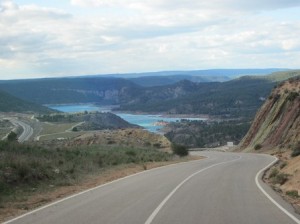 We decided on our trip through Spain that we would avoid the toll roads, and enjoy the more scenic routes the country has.  We also opted to explore the interior of this vast country, rather than follow the Mediterranean coast all the way down.

Armed with our trusty ACSI camping guide, we were reasonably confident we could find open campsites along the way.  This gave us the opportunity to really soak up the scenery and get lost in the little towns along the way! 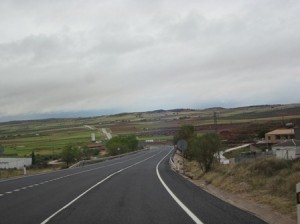 ng Explorer of Norway, other parts reminded African GirlChild of South Africa.  The contrasts were fabulous.

Our first glimpse of the Mediterranean came when reached the coast at the sprawling city of Malaga.  What a shock to the system!  The sea looked calm and the sun was trying its best to peak through the clouds, but the Costa del Sol was a continuous stretch of tourism and commercialism.  Such a contrast to the relatively uninhabited interior of the previous 5 days.

We made a slight detour to visit Tarifa – which surely must be the on the southern most point of mainland Spain.  It was a hazy day, but I was pleasantly surprised that we could see the coast of Morocco across the water.  I never realised just how close it really is.  With a strong wind 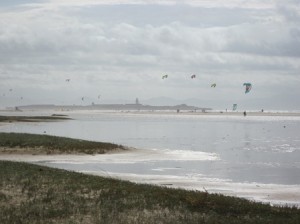 blowing, we were treated to displays of agility by the kite-surfers (about 40-50) who were playing gracefully between the waves and the sky.

Then, off to La Linea de Concepcion – the Spanish border town with Gibralter.  Here, we are being well looked after by K&E as we complete our final preparations for the big step onto the African continent.

How are we feeling?

Viking Explorer is displaying his true Viking heritage!  He is eager and excited.  Ready to tackle Africa.

African GirlChild is feeling a real mixture of anxiety and excitement – hopefully displaying at least some of the South African Voortrekker spirit, but feeling quite daunted by the enormity of the task at hand.  Have you seen how big Africa is ?!?!!!