The name of our adventure is dangerously coming close to being renamed – to SunSeekers Anonymous!  Or rather, that is the name of the selfhelp group we are perilously close to starting.   At the moment, that is all we seem to be doing – desperately following the sun, while keeping the chilly weather from nipping at our heels.

We departed Germany with an aim to stop over in Switzerland and spend time there.  As the weather gods would have it, our journey from Freiburg to Bern was in low mist – so low, that it gets caught in your hair and makes everything wet.  The picturesque countryside of Switzerland will remain, yet again, a mystery to be unravelled, as we saw almost nothing.

So, rather than setting up camp in the damp (!!) and waiting to see what the weather was up to, we carried on towards France.  Such a huge pity.

Our journey took us to Montreux, where we managed to find an open campsite (although we didn’t need one), and a spot for lunch.  We enjoyed our warm soup overlooking a very grey and misty Lac Leman (which I thought was called Lake Geneva).  It bore no resemblance to the visit we made last August, when we stopped and ate icecream under clear blue skies in shorts and T-shirts.

We continued clockwise around Lac Leman, eventually making our way towards Morzine and Les Gets area from Thonon les Bains.  We met up with a couple I had been chatting to on email for ages, had a quick cuppa and gathered useful advice on long range weather forecast.  It seemed that our plans of a few days in the Alps was due to be cut short – as the first serious cold front was on its way, and temperatures were due to plunge way colder than African GirChild can comfortably camp in (-10C is not for wimps!). 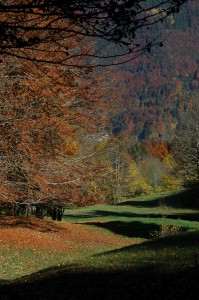 So, we cut our stay to 2 nights, and decided to make the most of our single day in the Alps – which according to the forecast, promised sunshine.

We were not disappointed.

The day dawned chilly, misty – but by 10am the sun had banished all clouds and we were 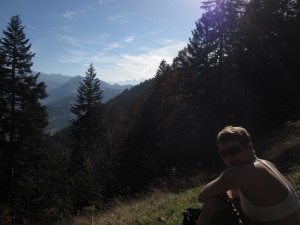 bathed in warm sunshine under clear blue skies.  We hiked from St Jean D’Aulps (800m) up into the forest covered mountains, and enjoyed a picnic lunch basking like lizards in the sun at 1,200m.  The autumn colours were magnificent!

Tomorrow, we are heading in the direction of Lyon, which should escape the brunt of the icy forecast.

Not before another cuppa with new friends.