The magic of the unplanned

The magic of travelling – for me – lies in the unplanned experiences.  And sometimes, these are the memories that last forever.

After Etosha, we headed towards Damaraland – or sort of in that direction.  We were on the way to Kamanjab, following the tar road from Andersson Gate via Outjo to Kamanjab.  About 20km before we reached Kamajab, we passed a sign for Otjitotongwe Cheetah Guest Farm.  On we went, until we decided it was worth going back to find out more.  Quick U-turn, and soon we were bumping our way on the gravel road leading up to the farm.

We were greeted by the very friendly owners, and were in the process of organising camping and a cheetah visit when it emerged that there were 2 overland trucks due that evening, so any activities would be carried out with 25 of our closest friends.  Sorry, but not our idea of a pleasant time.

We politely explained we would return another time, and headed on to Kamanjab.

But, let me digress slightly.  Of all the animals in the wild, the lion and cheetah are my passion.  Maybe is has something to do with having domestic cats since I was a toddler, or maybe it was my passion for big cats that resulted in me being a long time domestic cat owner.  But either way, they touch a serious softspot.

Anyway, next afternoon, we returned.  And to our delight, we were the only campers for the night.  Much better for cheetah experiences. 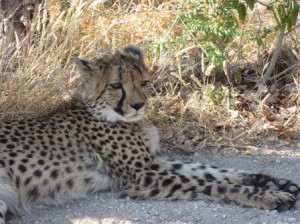 A little later – after a chance to have a snooze on the grass and watch the birds – Marco collected us in his bakkie (pick-up) and took us back to the farmhouse.  As we waited at the gate, we were given our instructions: no sunglasses, cameras are fine, only petting on the head up to shoulders, and when they lie down, make sure to keep your face arms length way in case of wandering paws.

WHAT?  Hang on a moment … We were actually going to be touching these gorgeous creatures?!?!?!!  I didn’t hear much more of the instructions – my mind was spinning.

After instructions, we were allowed in the grounds, and were met at the gate by some of the inhabitants: 2 tame cheetahs came towards us.  “Come on” said Marco, “they’ll follow”.  So, we made our way around the house to the back garden, glancing over our shoulders as we were followed by 4 cheetahs in the same way dogs would follow.  Astonishing.  These cheetah have been hand reared, taken in when they wouldn’t have survived in the wild – such as a cub being rejected – so have grown up amongst the farm dogs. 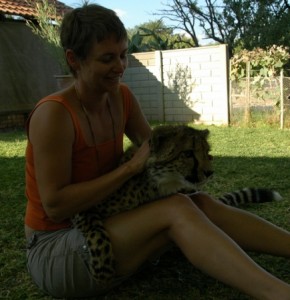 It didn’t take long for us to be shown great appreciation – a quick sniff and sandpaper tongues were licking our legs to the sound of deep, rumbling purrs.  “They always clean their meat before they eat it” Marco grinned.  Completely surreal.

The next half hour was beyond my wildest dreams.  We sat on the lawn while the cheetah moved between us, almost demanding to be scratched and petted.  They sat next to us, or flopped down beside us, perfectly relaxed while we indulged their demands and snapped photos of each other, the whole time listening to deep purrs.  The youngest – and eleven month old cub – played in the same way as any domestic kitten would: swatting at me with large paws, gently biting my arm or my knee.  The only difference was size and strength, which the cub had no realisation of! 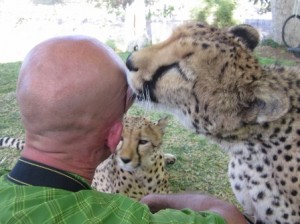 But, they are still wild animals, and we were ever vigilant.

Before we left, Marco fed them.  Just like dogs, they followed him to fetch the food, and then waited eagerly for their share.  We watched for a little while, before leaving them in peace.

Our afternoon activities were not over.  Next up was the feeding of the wild cheetah.

We clambered back into the back of the bakkie and headed to the 200 hectare enclosure which is home to 8 wild cheetah.  There was an element of Pavolv’s dog about it – when they heard the vehicle, some of them came to fetch food.  But, their demeanour was different, and Marco was certainly more

wary of them: no cuddling here.  The wild cheetah do hunt themselves, and so don’t always come to receive their share.  In our case, 6 made brief appearances as we drove around the enclosure.

Lastly, we made our way to the smaller 40 hectare enclosure which is home to a mother and her 3 cubs.  Her litter was originally 5 – which is on the large size for cheetah – but one died, and another looked like her legs had problems, so had been taken to be hand reared.  Even with 3 cubs, this mother would have had a tough time if she really was hunting to feed them.  They all grabbed the food on offer before moving off into the bush to eat.

And so ended our cheetah experience.  It was incredible, one that will live in my memory hopefully forever. If you are ever in the area, do make a detour to visit and support this worthwhile project.  And tell them we say hi.

Otjitotongwe is a working farm.  It was bought by Marco’s grandfather in 1931 and has been in the family ever since.  They currently farm cattle, sheep and goats.  Their work with cheetah started about 20 years ago.  They offer camping, and also have 5 2-bed chalets.

Only about 9,000 – 12,000 cheetah are estimated to survive.  They are extinct in 10 countries in their former range, and likely to slide into extinction in a further 11 countries in the future.  Namibia has the largest national population of cheetah.  Some are still in the wild, but cause problems for farmers by hunting their livestock.  Sadly, this often results in a bullet rather than relocation to a safe haven, such as Otjitotongwe.

1 Response to The magic of the unplanned