One of the attractions of Morocco is the vast number of pistes that link up various towns and villages.  The majority are, of course, not marked on maps, adding significantly to the appeal.  A few tracks have been detailed in Chris Scott’s book, and although somewhat out of date, the route details give enough of an outline that we could make our way. 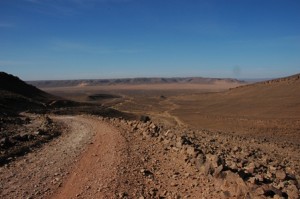 Of course, when we left M’hamid and said we were travelling to Merzouga, there was much drawing in of breath by the guide who had returned us safely from the excursion to the dunes.  “You’ll get lost” he proclaimed, assertively.  “It is very close to the Algerian border, and you don’t want to stray across” he added.  We told him we’d turned around if we felt lost.  He wasn’t convinced.  But despite his best efforts, he wasn’t coming with us.  This was ours alone.

What did we face? 240km of dirt piste from Tagounite to Merzouga.  That is what the book says.  Actually, the first 15km and the last 25km are tarred, leaving a mere 200km of dirt.  This was no “one day rally race” for us.  We planned to set off nice and leisurely and savour the scenery.

And the scenery was spectacular, and varied.  We passed through palm tree groves and small villages.  We climbed into and out of a wide flat basin.  We crossed the Hamada – 50km of flatness with mountains on each side.  At times the vegetation disappeared completely.   We touched the edge of the sanddunes.  The scenery was BIG.  I have grown up in Africa, and so quite accustomed to the size and scale, but this just stretched in every direction.

We did have a couple of military checkpoints along the way.  The first officer was very friendly, and like many

Although the tracks lead us to believe this was a well used piste, we saw very little local traffic at all.  But, never fear, there is always a foreigner around!  First, a group of 3 motorbikes and 1 quad bike with support vehicle passed in our direction – at speed!  Then, a tour of Italians in their 4x4s, travelling in the opposite direction.  No stopping for them: the lead car plus 5 followers sped past us.  One of the chaps was clearly dressed for the occasion – white collared shirt!  Not done yet, we met a group of 4 Belgian guys coming the other way in their Landcruiser, and decided to stop.  I was suitably embarrassed: 4 guys sharing one vehicle, and I barely felt we had enough space for the 2 of us in ours!  One of the travelling party is returning home in early December, while the other 3 are travelling onwards in West Africa for 6 months.  It was typical boys locker room talk as the guys all compared and shared preparation stories.

Our favourite part of this piste was the opportunity to wild camp – in complete isolation.  We stopped at 100km each day, and found a spot hidden just behind the first hill.  There was no-one else around.  This is as remote as I have ever experienced.  Just the 2 of us – and the nearest civilisation about 20km away.  Picturesque sunsets, and no barking dogs!  Magic.  Never fear, though, if wild camping isn’t to your taste, there are numerous camping and auberge options at 120km, and the last 50km too!

And all too suddenly, after 3 days, we could see the dunes of Erg Chebbi … and start being hassled by the touts of Merzouga.

(Photos can be seen on the Photography page)

This entry was posted in Morocco and tagged off-road piste, wild camping. Bookmark the permalink.

4 Responses to Three days by camel