Next day was a longish one – we needed to make it almost 300km to Roy’s Rest Camp just outside Grootfontein.  We also discovered that the main part of Namibia is on a different time zone!  So, turning the clocks back gave us an extra hour in the day.

On the way, we stopped in Rundu to find the “Forget-me-not Coffee shop”.  It took a lot of exploring and eventually a phone call to find it.  When we parked, a gentleman warned us that “tsotsis” frequent the area and we shouldn’t leave out vehicle unattended for fear of being broken into.  He offered to watch it while he was waiting for a security guard to come and watch his.  It was sad that we had to be made aware of petty crime, but we took up his offer and went to enjoy a quick coffee before returning with a hot chocolate for him. Then, it was time to drive to Roy’s. 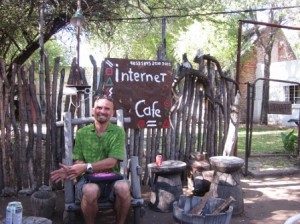 Roy’s Rest Camp is fantastic!  It has oodles of character, and is well worth stopping by. It has an eclectic mix of art works using anything lying around – bits of cars, pieces of wood, bricks.  So creative. It had an awesome little internet café tucked away under a tree – which just received wifi signal from the main farmhouse.

Each campsite had grassy patches for pitching ground tents, a braai area, and a table with bench made from stone.  Also, electricity to plug into and a light.  The ablutions were also tastefully done, and warm water was generated by a donkey boiler our back.  Just perfect.

Viking Explorer met a fellow camper – Alex – who is a tour operator in Cape Town.  He gleamed much useful information, and Alex answered numerous questions.  It has given us much food for thought.

By the next morning, I had to admit to myself that after a week self-medication wasn’t working.  A little niggly ear ache / sore throat had grown to the point where I woke up at 5am and took 45 minutes to slowly sip a hot drink to try and bring relief.  Our very kind hosts gave us the location of pharmacy and doctor in Grootfontein – a mere 60mk drive away.  After stocking up on venison for the next few days (just delicious) we were off. 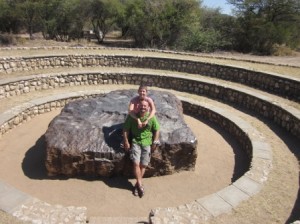 Now, the entire time I have lived in the UK the doctors have treated me like I was a hypochondriac and dismissed me the few times I have gone in.  I fully expected the same, but felt I just needed to see someone.  This doctor treated me with such respect – and even examined me!  As it turns out, my sore throat is more than just that … I have tonsillitis!  At this ripe old age of … ahem … 25 I am fighting childhood diseases!  But fortunately some common sense prevailed.  No bedrest for me – just a pile of antibiotics, awesome pain killers and seriously strong mouthwash, I was told to go and enjoy my trip to Etosha.  I like it. 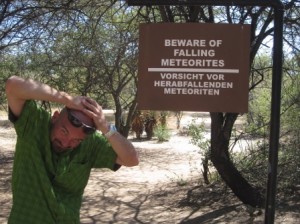 But first, time to stop for coffee at a lovely little coffee shop set in gardens.  Then, next stop to see the world’s largest meteorite – some 50 tons – which lies just outside Grootfontein.  Then finally back on the road to reach Onguma – our campsite just outside the eastern entrance to Etosha.

Onguma Bush Camp is set in a private reserve, with no facility to self drive.  The chalets and restaurant overlook a little waterhole and there is even a swimming pool!  Our campsite is similarly fabulous – with our own brick ablution facility and electricity!  I am getting used to the this style of camping.

So, tomorrow, we are off into Etosha.  So excited.  Can’t wait.

3 Responses to Towards Etosha