We have been on the road for more than 10 months now.  10 months of living out of the car.  10 months of the almost daily surprise of where to stay that night  10 months of sensory overload as we experience so many new sites, sights, sounds, emotions.

This part of Tanzania – the western side – is the less touristy side.  There is less English spoken.  Camping is few and far between.  Accommodation varies widely.  Finding restaurants to eat at seems more difficult.  Sorting out day to day admin feels more challenging.

And as we spend the evening in yet another sterile, functional, walled room, I miss my own bed (as the rooftop tent has become).  I am surrounded by the same emotions that I had when we were in Dakar, Senegal, all those months ago: loss of control, cooped up, waiting for the next step in the process (so to speak).  Dust is everywhere – our clothes are riddled, our skins tinged with red, and I have almost given up trying to keep myself clean.  While in Dakar we were sorting out shipping for the vehicle, here we are going through the ‘process’ of crossing western Tanzania to reach Uganda. 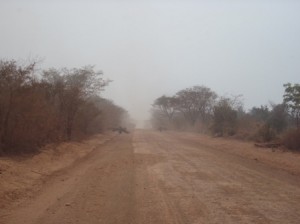 The roads are tough going.  The threat of Chinese tarmac, which was so evident on the southern part of this road, has now disappeared.  Every car or bus or truck that passes spews up huge clouds of the red talcum powder, which permeates every corner, crack and nook.  Distances are covered so slowly – a long day for us is only 250 – 300km … but at 35-40km/h that is up to 9 gruelling hours on bumping around.  While it is ‘only’ another 3 days of driving until we reach the border, it seems eternal.

We both long for the ease of travel in southern Africa.  It was so much more predictable, so much less tiring.  The excitement was in where to go to next, not having to worry about whether we could get supplies or find somewhere to stay.

But then again, this still beats a desk job.  Tomorrow when I wake up, I know the sun will be shining.  I know that it will at least be warm – if not hot.  The traffic we have to endure is a herd of cattle on the road, or the children walking to school.  We still occasionally meet other travellers – backpackers  people on short or long vehicle based trips, sometimes an overland truck – and a few expats too.  Almost without exception, everyone is friendly, everyone has an interesting personal tale to tell, and everyone is generous with their time and knowledge.  There is a certain colourfulness to life now, a certain 3 dimensional feel I can’t quite explain, that has been lacking for many years.

We don’t have too much longer left on the road, only about 2.5 months until the travel pot dries up.  We still have at least 2 more new countries to visit, and a fair few to revisit.  In a week’s time, I am sure I’ll look back and wonder what this was all about.  And in 3 months I am sure I’ll be wishing I was still on the road.

But in the meantime, a big hug from Tom & Jemina will make all the difference.  We’ll see them tomorrow.  Old friends and a bit of familiarity go a long way …