Anyway, after leaving Lilongwe, we made our way north for 3 days.  Our first night, we stopped at Luwawa Forest Lodge on the edge of Viphya Plateau.  The lodge is the old rest house for the logging operation, but has been taken over and developed by the enigmatic George, and his son James.  It is set in beautiful gardens overlooking a small dam. 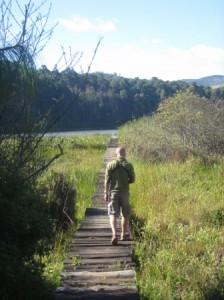 The estate has so much to offer – numerous walking trails, mountain biking, archery, fishing, canoeing on the dam – the list goes on – all set in the scenery of a forest.  We took an afternoon walk around the dam – Viking Explorer reminded of the forests in Norway, me reminded of the forests in the Tzaneen area of South Africa.  But at 1,700m, it was much cooler, and that night the temperature dropped to 4C – a bit of a shock to the system.  But, it was peacefully quiet, and we caught up on a few lost hours of sleep. 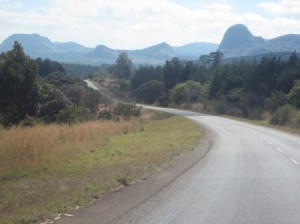 Next day, we continued our journey northwards to Mzuzu – the growing city which serves as regional hub and gateway for travellers to reach Nkhata Bay on Lake Malawi.  We stayed at Mzoozoozoo – an institution in itself!  George and James were also here, and we met up with Mike and Emma, who departed the UK on their African adventure in March 2012.  African GirlChild fell in love with the 2 ginger kittens – and probably would have cat-napped them, except for the logistics of travelling with kittens. 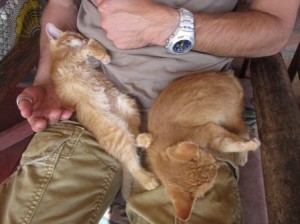 The camping was cheap, the food was cheap and the company entertaining.  Unfortunately, that night was a rather active night in the town, and the music continued until dawn.  Another poor night’s sleep … and both of us were really feeling sleep deprived. 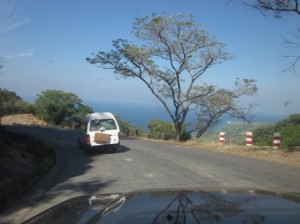 Onwards and northwards again – this time we headed to Livingstonia and Lukwe Perma Camp.  The scenery was picturesque.  We passed through rolling green hills, all part of the great rift valley of east Africa.  It was so unexpected, and so beautiful.  Finally, we also reached the edge of Lake Malawi – so enormous that the water extends easily to the horizon.  It is beautiful, and we look forward to the exploring the lake in a few days time.  Lastly, we had to climb the 15km from the edge of the lake up 500m altitude to the camp.  It took us 40 minutes of winding roads, hairpin bends, narrow tracks and stunning views until we finally reached the top. 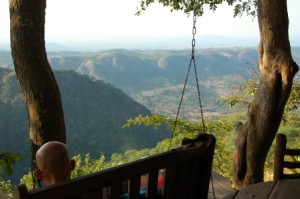 And here, so our surprise, we met Kat and Sam – another overland couple who we have heard about.  They departed the UK a month before us – the exact departure date of our original plan – and have almost completed the trip we planned: they made it up to Nordkapp, and crossed through Mali in December 2012 before the French arrived.  It was wonderful to hear about their adventures.  They are rapidly reaching the 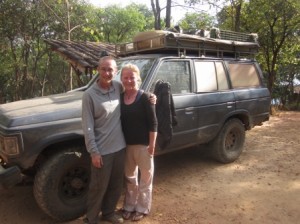 end of their adventure, having just completed a loop in Tanzania before heading back to Cape Town to ship the vehicle to the UK.  They are erring on the side of caution, and giving Egypt a skip.  We spent an enjoyable evening together picking each other’s brains.  And most importantly for us, we had a quiet night’s rest in lovely warm temperatures.

6 Responses to Trekking northwards in Malawi