With the feel of cheetah fur on my palms, and raspy licks on my legs, we bid farewell to Otjitotongwe – off to Twyfelfontein! 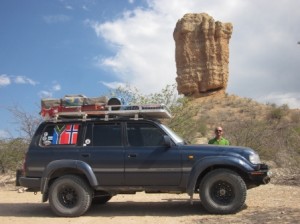 On our way, we stopped past Vingerklip.  This is a limestone pillar, about 35m high, that is all that remains after erosion of a plateau formed more than 15 million years ago.  It is impressive when viewed from a distance.  It is awe-inspiring when viewed from the base.  We followed the path that wound its way from the parking up to the huge pillar, enjoying the views of both the formation as well as the surrounding scenery.

As ever, our onward journey took us through more gorgeous scenery and landscapes.  The road stretched before us, while the mountains, hills, and rises waxed and waned around us.  Ever changing. Constantly beautiful.  Somewhat overloading to the brain.

As we drew closer to Twyfelfontein, there were many signs for accommodation, but we had already decided to stay at the local community campsite – Aba Huab Campsite.  So far, it was the least impressive of all the fabulous places we have stayed – doors to some loos seemed to be an optional extra!  However, we did have a warm shower, the pipes of which were wound creatively into a tree.

While setting up camp, we could sense a change in the air – and we could smell rain!  Rain?  Couldn’t be.  And if it was, surely only a light sprinkle.  So, we were caught out on our afternoon walk when the heavens opened and the wind drove the rain sideways.  Drowned rats both of us.  But, it was short lived.  Soon everything was dry again, and dinner was on the go.

Next morning we were off to do some more site seeing.  We had originally planned to visit the nearby “Living Museum”.  Here, visitors can view traditional village life.  But, I am sceptical as to the authenticity, cynic that I am.  We gave it a skip and headed to the rock engravings, a UNESCO World Heritage Site.  Here, the rock art is carved into the rock surfaces using quartz rather than painted on.  It is one of the most extensive rock art sites in Africa.

The visitors centre deserves a mention.  It was built almost entirely from recycled materials, reducing its construction cost to a third of newly built.  Also, the clever design means that it can be very easily removed without leaving any traces behind.  Most noticeably, it used old oil drums: the circular ends used to create some partitions and

doors, with the curve of the barrel used to make roof tiles.  Very ingenious, and had us thinking about clever ways to use recycled materials in our next home.

We paid our fee and the guide – Mona Lisa – took us on a tour of the rock engravings.  They date back 2,000 – 6,000 years ago when the climate was more wet and the animals more plentiful.  This art formed some communication between tribes, and also marked places where holy men believed there were doorways to the spiritual world.  They are remarkably well preserved and we enjoyed our visit.

Next, we stopped past the organ pipes and the burnt mountain.  These were fee free sites, and we stopped briefly.  The day was heating up rapidly and we wanted to reach our next campsite at Brandberg Mountain.

The impressive granite rock of Brandberg rises out of the plateau, and can be seen looming on the horizon from many miles away.  Some time later, we reached the last stretch of gravel roads up to Brandberg White Lady Lodge and we were relieved to finally reach the reception.  It was hot and we were both feeling tired.

But what a stunning place!

The main lodge was very inconspicuously built into the surroundings.  They had grown a beautiful succulent garden: cacti, aloes and other plants adapted to low rainfall environments.  There were 2 meerkats who roamed around the garden: playing, digging, watching.  We sat out the heat of the day drinking ice cold drinks on the lodge verandah – who would have thought it would reach 40C in autumn! 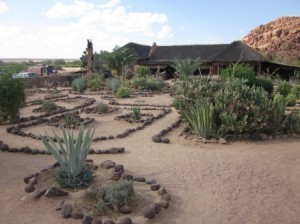 The campsites were enormous, and spread over a large area so that in theory you had a feeling of being on your own.

Because, despite the fact that the 28 stand campsite was only half occupied, 2 vehicles with 8 Austrians decided they wants to set up camp as close to us as they could get!  What is it with some people?  We decided the safest option for everyone’s sanity was that we find another site, which we duly did.

We wanted to do some hiking, so the next morning we pulled on our hiking boots, filled our backpacks with snacks and water and headed off.  Our aim was to climb one of the tiny hillocks on the edge of Brandberg, which didn’t look that far away.  Perceptions can be deceiving, and after an hour walking directly towards the mountain … we still hadn’t reached it!  A further 15 minutes and we reached the bottom.  No climbing, just a quick rest and then back again.  Despite an early start, the heat was rising.