After the tranquillity of Djidjack, Dakar was bound to be a bit of a culture shock.  In fact, it wasn’t that bad.  Once we tuned in to its own unique rhythm, it was a likable city, and surprisingly affordable (if you knew where to look).

We were recommended a charming little hotel by Jean-Paul at Djidjack.  It was nothing terribly fancy – just 8 rooms over 2 floors in Grand Yoff near the airport.  But Hotel Sousoum was just the little oasis in the heart of a big city that we needed.  The rooms were clean, and free wifi was available in the rooms as well as the courtyard.  The hotel manager Dominique was such a very kind man, and helped us with all manner of odd requests.  His broad smile and cheery greeting made us feel right at home.  Although the parking was outside the walls, a night guard kept a watchful eye over our little home on wheels.

The local area wasn’t too exciting in itself, but within a 2 block walk we had a choice of 2 tiny local restaurants serving delicious meals at seriously local prices.  The size of these restaurants?  Only 3 tables each, and when the food is finished, it’s finished!  There was a bakery / patisserie which had some heavier breads than the typical white French baguette (all air and sugar I tell ya), yoghurt with cereal (a real treat) and some delicious pastries!  In addition, there were fruit sellers across the road, and a lady selling fresh omelette baguettes for breakfast right outside the hotel!  We were actually spoilt for choice.

Most overlanders tend to use Dakar as a reliable place to obtain visas before heading  further east – a very wise move.  We managed to see a few touristy sites in addition to taking care of business.

We met Malika – a family relation of Dominique – and spent a few hours seeing Dakar though her eyes.  We visited the Mali market near the port and spent time wandering around seeing the arts and crafts typical to Mali, while she bartered for stock for her shop in Brixton market in London.  Then, off to visit a Malien friend of hers for lunch in another market (which we never quite caught the name of).  We wandered through the streets of Dakar, learning how to dodge taxis and other cars.  Our lunch was in a very typical Senegalese restaurant near the market – people packed in like sardines while the overhead fans did their best to calm the sweltering heat.  After lunch, we visited his shop to see his fabrics from Mali.  Just gorgeous.

Although we only spent a few hours with Malika, we really experienced the heart of Dakar, and we are very grateful to her for allowing us to tag along on her busy day.

With new found bravery, we felt more comfortable exploring other parts of Dakar.  We visited the Kermel market – a large round building with meat sellers in the middle, and fruit and veg around the outside.  It did seem that the fruit and veg was imported, as it was some of the best looking we have seen while in Senegal.

The Place d’Independence in the centre of the city is impressive for its size and green grass.  However, after settling ourselves on the grass for lunch, we were informed that sitting on the grass was “interdit” and we needed to move on. 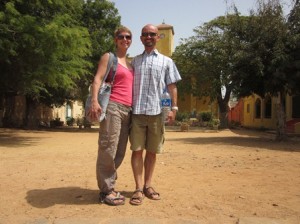 recommend the outing.  Although it was rather touristy, and we managed to miss the Slave House (no information available unless you have a guide), it was interesting to see a small part of the history of Dakar.

The traffic in Dakar has a set of rules all of its own.  Somehow, it all just keeps moving and flowing, although there are always people cutting in, pushing in, changing lanes, mostly with a hand stuck out the window which seems to indicate “I am going to do it anyway so please give me some space”.  Taking one of the yellow and black taxis is definitely the better way to experience the traffic!  Although we never saw any knocks, bumps or scrapes, the state of 99% of 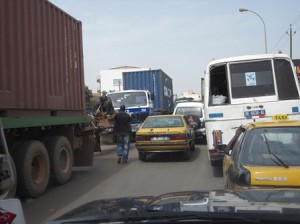 vehicles on the road suggests this is a fairly common occurrence!  Bargaining with the taxi driver to agree a fare – before hopping in – is somewhat of a game.  And Viking Explorer became an expert!  He quickly figured out how much it should cost to get from A to B, and would refuse to budge on the price he had in mind.  In obvious frustration, one taxi driver told him he was like a Senegalese … and then agreed to the price!  We quickly learned, though, that just because the taxi driver says he knows the location you want to go to (particularly when returning to our lesser known hotel), doesn’t mean he does!  Frequently, a mere 30sec of starting moving, the driver would be on his mobile asking a friend if he had heard of the hotel and had any idea where it might be?!

As tourists, we were hassled a lot less than we expected.  Most of the time we walked around undisturbed: we were bothered by the peddlars selling mobile top-up airtime as much as any Senegalese.  But people were very friendly.  In Place d’Independence, after being evicted from the grass, Viking Explorer chatted to a chap on the bench we shared for about half an hour.  He was Senegalese but living in France, and was enjoying his 2 month vacation back in Dakar.  Almost everywhere you are – in a tiny local restaurant, waiting for the ferry, on the stairs in the hotel – people always seem to have a cheery “Bonjour, ca va?” with a smile and handshake.  And that is even just if they are passing by!  When did that last happen to you in Europe?

The most pestering we experienced was at Place d’Independence (hoards of sellers selling everything imaginable) and on Ile de Goree (the ladies selling their armfuls of jewellery).  And once you express even the tiniest iota of interest in one item, that seems to be the cue for everyone to crowd around and shove their wares under your nose!  Bargaining, here too, is the name of the game.  And of course, the best deals are had when you actually walk away.  I bought a scarf for 1,000 CFA down from 3,000 CFA (and probably still overpaid) after I had said no and walked away.  The seller chased me for half a block and gave me my price.  I think the tourist pickings are thin in these economic times.

Please click on the first picture to start the slideshow.  Captions will be shown with the photos.

We cannot display this gallery