After 2 long days of driving, we finally sat on the white beach with drink in hand and gazed at the calm waters extending to the horizon.  It was hard to believe that this was no ocean we were staring at, but the large man-made lake of Kariba. 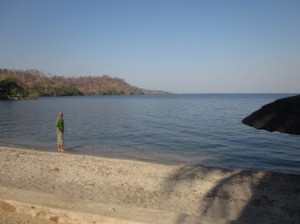 Our departure from Livingstone included a stop at the pharmacy.  Viking Explorer was still hassled by a persistent niggly stomach which had been aggravated by the deliciously cheesy calzone pizza of the night before.  African GirlChild was fighting off a returning throat infection.  The pharmacist – surely accustomed to these minor ailments from travellers – dispensed his advice and prescribed the necessary antibiotics before sending us on our way.  We also needed to buy some rusks from Shoprite – Viking Explorer’s posh alternative to “dry bread and water” while his stomach settles.

There was nothing terribly interesting about our journey on the tar road that day, and we arrived at The Moorings campsite outside Monze in the early afternoon and set up camp.  This is a lovely peaceful campsite set under large trees near to the main farm. 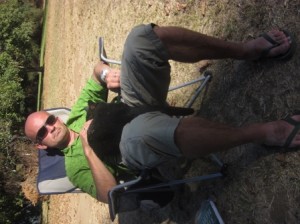 After cuddling with the friendly campsite cats, we headed for a stroll.  We strolled through the nearby village, many inhabitants of which work on the farm.  It was so liberating to see the children … playing outside!  No PlayStation, X-Box or TV in sight; only the creativity that comes with childhood ingenuity: running, climbing trees, playing with a ball.  There seemed to be no age or gender discrimination – assorted groups of children played together.  While I appreciate there are other downsides to their lifestyles, this outdoor activity isn’t one of them.

We also met an interesting assortment of people.  There was a group of 4 Irish medical students who were spending a month volunteering in the local hospital in Monze.  They admitted their first few days had been a complete culture shock, and I can only imagine what they saw in the local hospital.  We also met Joybell, a VSO volunteer from the UK who was finishing up her time in Africa helping at the village school.  She too admitted her two and half years in Zambia had changed her outlook on life.  That is what Africa does to you!

That night was the coldest we have spent in southern Africa.  The minute the sun set, the temperature tumbled, and extra layers were quickly donned – including beanies!  More than that, the campsite had extra blankets in their storeroom, and all campers – including the 4 medical students huddled in their tent – gratefully borrowed a thick one to take to bed.

Next morning we headed to Eagles Rest, the campsite in Siavonga overlooking Lake Kariba.  The last stretch of our journey was on the road that links Lusaka to the borderpost of Chirundu (to Zimbabwe).  It was a rather busy road, with many large articulated trucks travelling in both directions.  The road was suffering from the heavy roads, but the trusty Chinese contractors were on the scene laying new tarmac. 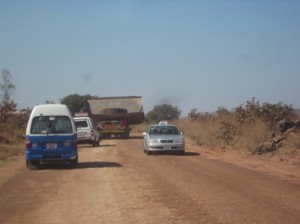 This part of Zambia was very different from what we expected:  after the sand and dry habitats of Namibia, we somehow expected more of the same.  Instead, as we wound our way closer to the lake, the trees increased in number and we passed through beautiful rolling hills.  It felt out of place, but was so very welcome. 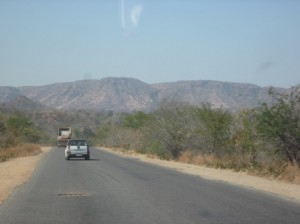 Our first glimpse of Lake Kariba held the same excitement for me as reaching the sea for the first time each childhood holiday.  We were here!

Lake Kariba is one of the world’s largest man-made lakes, creating a stretch of border between Zambia and Zimbabwe.  At the time of its construction in the 1950’s, it was apparently known as one of the engineering wonders of the world.  It was created by damming the Zambezi River at the Kariba Gorge, and flooding the valley.  The dam wall also has 2 hydroelectric power stations.  It was officially opened by the Queen Mother in 1960. As for its size?  A mere 280 km long and 32km wide at its widest point.  No wonder it looks like a small ocean!

Our visit to the dam wall was a part way border crossing, requiring us to leave our passports behind at the Zambian border post – nothing like ensuring you’ll return!  We parked along the roadside and wandered onto the wall. 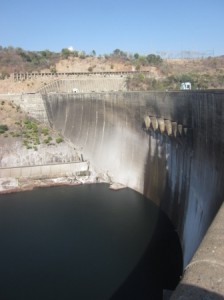 It was incredible to have the water on the lake side of the wall high up, and then peer more than 100m down to the river on the other side!

We retrieved our passports (glad to be reunited) and made our way into Siavonga and to the campsite.  After another long day, our quiet campsite on the banks of the lake was most welcome!  Drink in hand, beach sand between the toes, sunset over the lake finished the day perfectly. 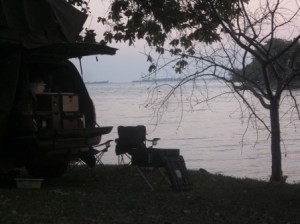 2 Responses to Visiting the inland sea