Posted on February 14, 2013 by African GirlChild 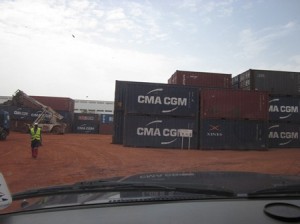 Two very important points: 1) Africa changes quickly; 2) It isn’t about what you know, it is who you know…

We were in Tambacounda in Senegal when the French decided to intervene in Mali, and we were at the campsite in Palmarin when the five people were killed in Casamance. It really confirmed our decision to ship our vehicle from Dakar to Cape Town. Here is what we experienced:

Our initial contact with the shippers started Monday 28 Jan. After several broken promises of quotes, and two replies of “no, we cannot help you”, we realised we had to go into Dakar to knock some doors down.

We arrived at our hotel in Dakar, and met Dominic at reception. We decided that it wouldn’t hurt to ask for help, and so we asked if he knew someone in shipping. Turns out a close relative of his regularly ships from Dakar to the UK, and might be able to help. And even better, she was in Dakar at the moment and might be able to stop by the hotel to chat to us. 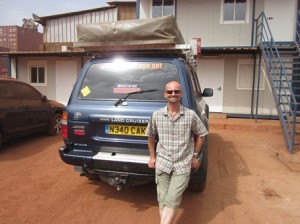 Malika arrived the next morning (Monday) and announced that she also needed to talk to her shippers, so we could join her if we wanted. We arrived at Delmas Shipping and met Pauline, who Malika has dealt with before. A quick request to Pauline and we had a quote in hand! The quote stated 50 days, but on further enquiry the schedule came down to 19 days (the rest was safety margin…). Pauline then introduced us to Ousseynou who would be our Freight Forwarder for the shipping, and he gave us a quote for his services. Having the shipper and the Freight Forwarder in the same company is definitely a plus! Ousseynou also indicated that we could load the container the following day.

Tuesday we drove down to the offices, armed with our Carnet and Passports. We had to get both stamped by customs, and followed an assistant to customs to have it all sorted. The customs officer was very understanding, and stamped the Carnet with an exit date corresponding with the vessel departure date. After lunch we jumped into the vehicle and followed Ousseynou to the container yard to load. It turned out to be a very long process with lots of waiting. At one stage it looked like we would have to leave the vehicle there over night, but we managed to look sufficiently irritated and we finally loaded after 3.5 hours. Carnet stamped, passport stamped, vehicle loaded, container locked and sealed. Looking good! 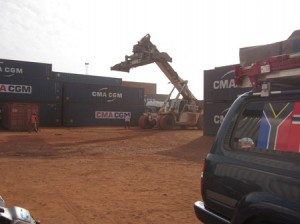 Wednesday we went back to the offices to pay, we thought. When we arrived we had to fill in another form, but no payment was taken. We asked, several times, if there was anything else we needed to do. “There is no problem” was the reply, so we left the offices for the day.

Thursday morning I wake up to an email saying they want an inventory for the vehicle. I send a list of 8 bullet points, but this is not enough – they need a detailed list (down to the number of socks and undies…). I suspect this has something to do with customs, but not sure where and how (I guess we’ll find out). Slightly tricky as said vehicle was already sealed in a container, but we did our best.  That sent off, we tried to relax the rest of the day. 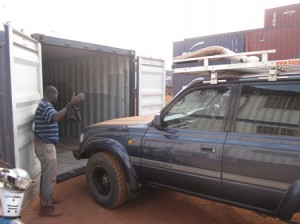 Friday we decided to go back into the offices to ensure they had everything they needed and to maybe pay. As we sat waiting the big boss came to see us. He said he was concerned that we had been there so many times that week, and wanted to know if everything was OK. We said we were waiting for Ousseynou and he promptly went over and had a chat. When we spoke to Ousseynou again he was noticeably more stressed than ten minutes earlier. We said we only wanted to ensure he had all the information he needed, and after an affirmative answer we left the office for the weekend (we thought). Around lunchtime I received a slightly panicked phone call from Ousseynou asking me to “come to the container depot with the Carnet now now now”. Turns out the customs at the depot needed to see it again (although he had witnessed the loading himself) so that he could make some notes on the back of the Draft Bill of Lading. After that, one of the other Delmas Agents needed the Carnet to go to the Port Authorities to do some more paperwork. Ousseynou looked visibly shaken and stressed, and made several references to his boss calling him repeatedly. 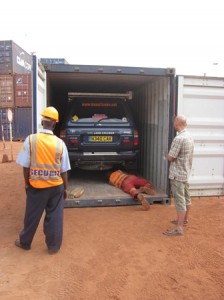 Monday again (following week) and I wake up to an email saying that Ousseynou will contact me as soon as the ship has departed, so that we can come and pay and receive the original Bill of Lading (which we need to get the vehicle out of the container and start the Carnet process in South Africa). Looks like it has all been sorted, and that we can fly out in a few days.

Tuesday rolls around, and we still have not heard from Ousseynou. We call, and he again says he will call us when we can come to pick the paperwork up. We are starting to lose patience, so we decide to go down to the offices to see what’s going on. When we get there Pauline asks if we want to pay, and we say yes. The process of sorting out the Invoice and the original Bill of Lading then starts, and again nothing is straight forward… The original quote was in USD for the shipping and in EUR for the freight forwarding. Turns out I cannot pay in USD and EUR, only in CFA. Do I have CFA? No. So I need to go change. But the banks are closed at 1640, so we have to use a Bureau de Change. The cashiers at the shipping company close at 1630, but fortunately they had stayed open for me to pay. I was not impressed at this time, so it was a good thing I could pay. Payment done, I received the receipt, and could then go to collect the Original Bill of Lading. Finally we were done.

Thursday, and we are at the airport passport check. I go first, and the customs officer asks how I entered the country. I answer by car via Diama Dam, and he then wants to know about the car. Because we were adamant that the car exit should be stamped into African GirlChild’s passport we show him that stamp, and all is good and it is all smiles. Process is now finally completed on the Senegal side, and all three of us have safely and officially exited Senegal.

Here are some of the facts and points to remember: 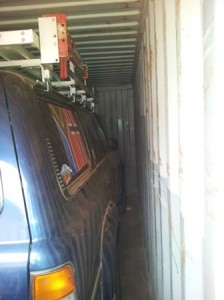